Where the Interns Learn what "Personal Space" Means to a Seagull 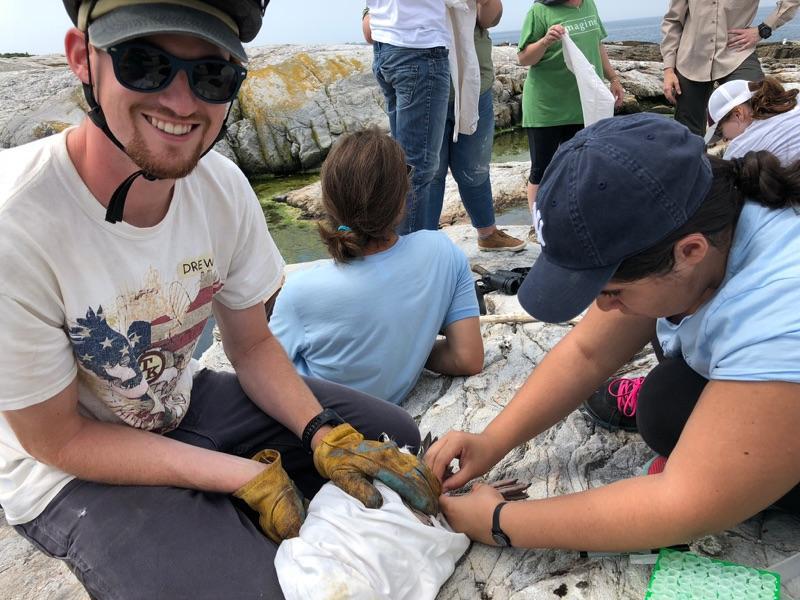 We have been doing a crazy amount of work in the last few weeks! Read on for our stories about projects we've been working on with our partners the Town of Durham, Moreno Forestry, Gulls of Appledore Research, and SELT (links jump to our stories, below).

Stewardship with the Town of Durham

After our two weeks with NH Fish and Game at the start of our summer, we got right to work with Ellen Snyder, an independent consultant and owner of Ibis Wildlife Consulting. Ellen is working for the Town of Durham currently as the Land Stewardship Coordinator, focusing on the big conservation areas like Doe Farm, Oyster River Forest, and the newest one, Thompson Forest. As such, her job is to make sure conservation easements are monitored annually, write management plans for the conservation areas, and implement these plans. Our work with Ellen was helping her reach some of these goals for the properties. 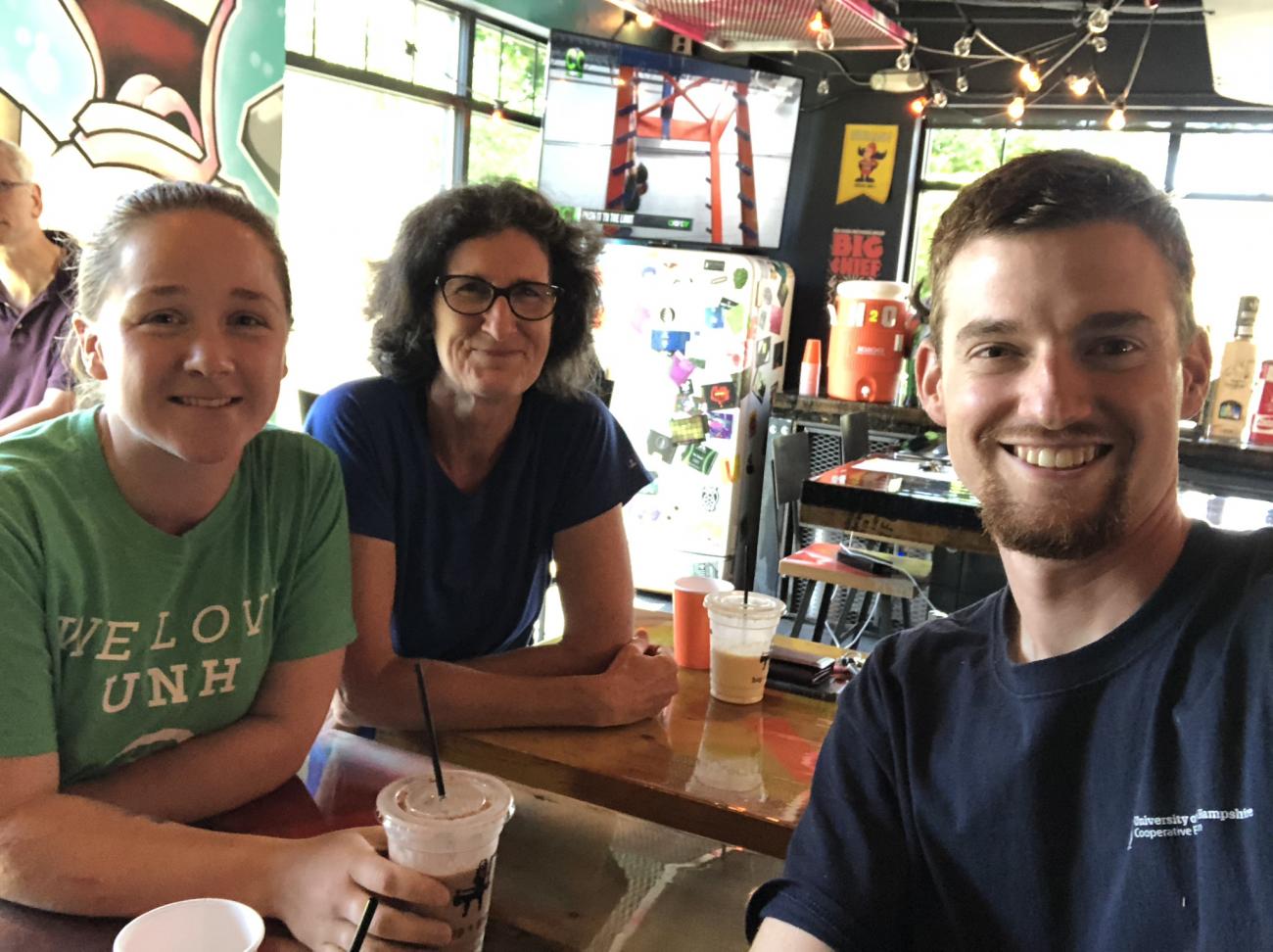 We got to work with a variety of tools and learned so much about the type of management needed for conservation areas. One of the main problems that Ellen deals with is, not surprisingly, invasive species. We spent plenty of time pulling out the pesky buckthorn.

This stuff is pretty nasty as it out-competes native plants, lacks any natural controls like insects, and hosts other pests. It is considered a noxious plant in both the United States and Canada and its sale is prohibited in the state of New Hampshire. For more information on buckthorn, here’s an article for landowners written by Dr. Tom Lee of UNH on buckthorn.

Besides pulling invasives, Ellen brought us into the work she is doing at Thompson Forest. We cleared a new trail of big stumps and roots, or as she calls them, “toe trippers.” A great help was having a local resident, John (and his tractor) to pull out the biggest stumps in the path.

We also put in some posts and signs along the trail as friendly reminders for those using the property. Ellen was extremely knowledgeable about the wildlife, plants, and habitat of the conservation areas we worked on. The days were filled with insightful remarks from her such as, “oh this is…” or “use herbicide minimally, and if you use it, have a very good plan” or “see that red-tailed hawk?” We could work with her for years and constantly learn something new.

We took more steps into the forests of New Hampshire with Charlie Moreno of Moreno Forestry to understand how foresters can impact and shape the woods around us by managing a forest. We got to see how Charlie’s work as a forester has increased the variety of tree species using natural regeneration for the future in the forest at Branch Hill Farm in Milton, NH. Branch Hill Farm has an awesome network of trails along the Branch River with local attractions like the New Hampshire Farm Museum and McKenzie’s Farm nearby.

Charlie and his colleague, Nick Lanzer, taught us all about the regeneration of a forest, its lifecycles, and how to identify a tree’s species from a tiny seedling to a towering mature tree. An important technical forestry skill we got to use was Diameter at Breast Height (DBH) measurement. This task involves using a specially calibrated tape to measure the diameter of a tree at a standardized 4.5 feet above the ground. This value is very important and can help a forester determine a host of information regarding the tree given it’s age and species.

This internship has brought us in contact with a plethora of amazing people and experiences, but we’d have to say gull banding was the closest and most exciting contact we’ve made with wildlife so far. For an entire week in July, we were up close and personal with the Great Black-Backed Gull (GBBG). We were led by the fearless Sarah Courchesne, DVM and faculty at North Essex Community college and Mary Everett, and joined a phenomenal team consisting of fellow college students, high schoolers, and previous banders.

Our job was to capture baby gulls, draw blood, take measurements, and band the babies before returning them to their anxious parents. If you don’t know much about GBBG’s, that’s okay, we didn’t either before this. But maybe we can tell you a bit about how territorial, loud, and aggressive they can be when you take their babies. Just so you don’t have to experience it yourself before you’re ready.

Here’s a quick 4 minute video by Cornell’s Lab of Orinthology, detailing Gull Territoriality between Herring Gull and GBBG’s on Shoals. It’s ferocious. The gulls have certain calls to fend off territory invaders, to call for their mates, and to tell their chicks they have food for them, and there is no rest for these gulls. Gull calls could be called obnoxiously loud by certain sleeping interns at 5:30 in the morning. Earplugs were a very handy item to have.

Each member of the team had different roles. Alaina was in charge of drawing blood from a vein in the chick’s leg. Having never worked in phlebotomy before, she was amazed at the skill, patience, and attention it takes to draw blood. It takes care.  This blood sample helps Sarah Courchesne and her team determine the gulls gender and estimate how may males to females are produced.

Drew had a much livelier job. While still needing skill, patience and care, combine those skills with chasing a squawking chick in and out of poison ivy and over rocks, all while being dive-bombed by an angry, vocal, parent with a five-foot wingspan. The catchers who ventured out to catch the chicks all wore helmets because, when the parents swoop and attack, they can actually fracture skulls.

After the scramble, the chick is put into a small cotton bag. This calms the baby as much as possible because their eyes are covered. Then the chicks are brought to the blood-drawing station, where I tried to be as gentle as possible with a blinded chick who really doesn’t want to get his blood drawn. The catchers then held the chicks for head-and-beak and the tarsal measurements and weight recording.

Sarah and Mary would then put a federal and a field band on each of their legs. The field band helps the gull banders identify their previously caught gulls in the field without having to get too close again.

Gull banding was such a unique experience for both of us, and one that we would love to be a part of in the future. It was hard work, as Sarah can attest. In her Gulls of Appledore blog, she leaves her readers with this thought, “The work tires me out, frustrates me, takes me away from my family. Sometimes I consider not doing it at all, and whether it’s worth it. But those are questions common to all forms of teaching. When I am on the boat to go back home, scratched, bruised, dirt-smeared and stinking, I find, every time, they’re asked and answered.”

After wrapping up our exciting week with the Gull Banding team from North Essex Community College we completely switched gears to focus on land management with Phil Auger, and his dog Java, of New Hampshire’s Southeast Land Trust (or "SELT")

Working with Phil, we learned about the challenges to the careful stewardship and management decisions of conservation lands. We were able to expand our skill sets, from basic carpentry to working with volunteers for trash removal and major trail improvements. Working alongside a dedicated crew of volunteers we built a major bridge for a new trail at Stonehouse Pond in Barrington, NH.

Showing up in the morning to a pile of lumber and then leaving in the afternoon with a completed bridge utilizing a team of novice builders, gave us a huge sense of accomplishment and satisfaction. Alaina’s favorite part of the bridge building project was getting to use a nail gun for the first time. And having been introduced to an impact driver, we now have our Christmas gifts checked off for dads (or maybe ourselves).

Drew enjoyed walking around the properties and talking to Phil about the long-term management plans. After a few days of these talks, it became clear that not everyone appreciates having protected places to go and recreate. He frequently stressed to us that to continue the shared use of lands and ensure future access to these special and unique places it is important to treat them with respect. Simple steps such as following the posted uses for the land, removing trash, and helping maintain posted signs and trail markers will ensure that land managers are able to keep these lands and trails open for future use.

We look forward to the last few weeks of our internship where we get to work with the Rockingham County Conservation District and SELT, once again!