A Tale of Turtles and Cottontails 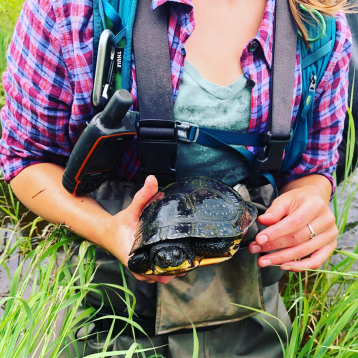 In particular, a close working relationship with the state of Rhode Island and the Roger Williams Zoo ensures that new individuals can be added to the populations, helping to increase genetic diversity and prevent inbreeding. Loss of habitat and competition from the Eastern cottontail have contributed to the New England cottontail's decline. Both species look nearly identical and that can complicate finding individuals or new populations. For information on New England cottontail or to report possible sightings, visit nhrabbitreports.org.

We were able to assist Brett and the captive breeding program throughout the two weeks by using radio telemetry to track the movement of individual rabbits within their enclosure.

This information will be helpful in assessing the success of female nests and the addition of new cottontails to the population. Radio telemetry uses a tracking collar that emits a radio frequency, getting louder the closer you are to the collar. Basically, we were playing an extremely scientific game of hot-and-cold with the bunnies.

We can tell you, they are excellent at staying hidden and love thick underbrush. When we weren’t tracking down the rabbits’ favorite spots, we built brush piles along open spaces within the enclosure to provide places to hide from predators as they move from thicket to thicket.

One new experience for both of us was learning how to cut brush. In order to ensure survival of the rabbits, keeping predators out is key. One way to do this is to keep 4-6 feet cleared from the fence inward. After a few hours, 1 blister, and a whole lot of sweat later, and some poison ivy, we got to sit back, satisfied that any predator trying to sneak in would be seen, at least for the portion of fence we cleared. If you’re wondering, brush cutting is a much slower process than one might expect.

During a few days with New Hampshire Fish and Game, Brett gave us an opportunity to work on another one of their wildlife projects. Wildlife biologist Sam Morrisette, took us on an adventure to find Blanding’s turtles in the wetlands of southern New Hampshire.

These turtles are state-endangered and are particularly vulnerable because of their slow aging process.  Most don’t reach sexual maturity until 14-20 years, and they can live to be over 70!  Major threats to Blanding’s are road mortality, loss of habitat, and fragmentation. Sam and her team are interested in learning more about the turtles' habits, where they are migrating and how to better protect them in the state.

About 30 seconds into our trek to find the traps, we realized we were ill-prepared. Nothing short of chest-waders would be sufficient to slog through the marsh. In thigh-waders and rainboots, we got wet fast.

But that didn’t stop us! In the set of traps, we found a female Blanding’s turtle, estimated to be 30 years old based on the number of lines on her plastron scutes (bottom shell). We brought her back to the shore and Sam notched her shell in a prescribed manner to distinguish her; this girl became number 341. Then she attached a radio tag to her shell using epoxy.

With no harm to the turtle, these radio tags help New Hampshire Fish and Game track the turtles, to see where they are hibernating, their migration routes, and nesting sites. All this information is critical to protecting vital habitat and important travel corridors for the species.

After a full day slogging through the wetlands, we found one more Blanding’s—a male around 25—plus 3 painted turtles, and one feisty snapper. A memorable part of the day was asking Sam what her favorite part of the turtle project was; she said the small victories. She loved the thought of looking back on the project over 10 to 20 years from now and thinking, “Yeah, we did a lot.”

We told Sam we would let you know about a cool citizen-science opportunity. If you see a Blanding’s turtle on your own property, please look into the New Hampshire Wildlife Sightings Page. To understand the turtle population, habitat, and conservation efforts, knowing where the turtles are located is extremely helpful for New Hampshire Fish and Game!

Here's a shout out to Brett, Sam, and Becca of New Hampshire Fish and Game for teaching us about their projects and letting us be a part of the amazing work they are doing!