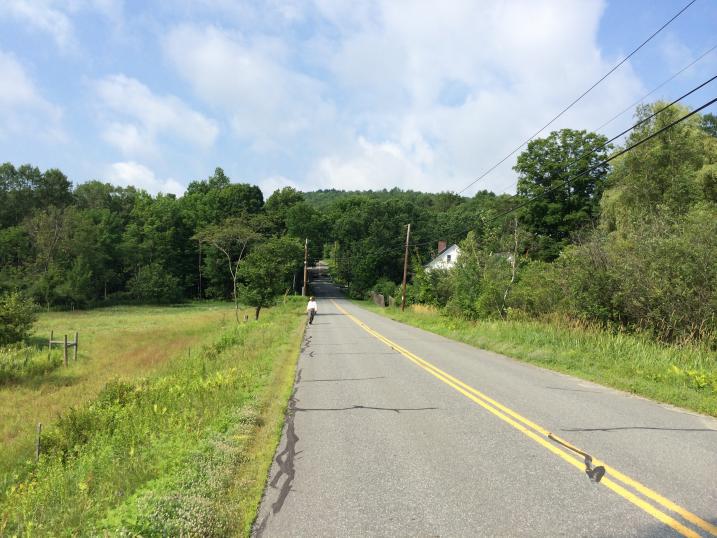 In early July I met up with consultant Mike Bald (GotWeeds?) as he was walking a roadside in Norwich, Vermont. He was scanning the waist high vegetation, looking for wild parsnip among the ferns, sedges, cattails, goldenrods, and other native plants. His search image is well honed for wild parsnip—Pastinaca sativa—an invasive plant that has invaded Vermont’s roadsides, fields, and field edges. 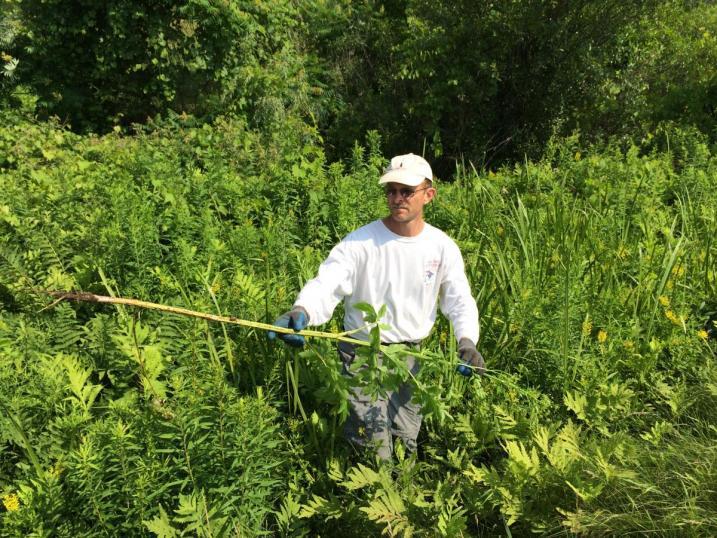 Wild parsnip is an edible plant native to Eurasia; more specifically the root is edible and was the original source of the parsnip cultivars now grown in gardens. It escaped cultivation in the United States and is now widespread. Wild parsnip produces a sap, or plant juice, that can cause burns to the skin in the presence of sunlight. In some cases, the burns are similar to second-degree sunburns, and can cause painful rashes and blisters. It is a close relative of carrots, parsley, angelica, and giant hogweed, all of which can cause similar reactions in people with sensitive skin.

Once he spotted a wild parsnip in the ditch, Mike walked up to the plant and carefully and slowly pulled the entire plant out of the ground, root and all. “That was a kill,” he said.

Wild parsnip is a biennial. The first year it develops a rosette of low growing leaves, that resemble large celery tops. In year two it sprouts a hollow, grooved flower stalk that grows 2-5 feet or more. By mid-summer the branched stalk bears umbels of small yellow flowers that produce many large, flat, oval seeds before the entire stalk turns brown in late summer. 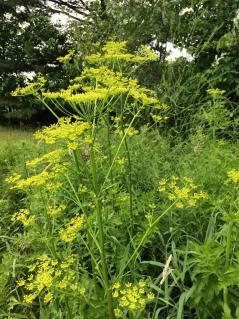 Mike focuses his parsnip control on the second year stalks when they are still in flower. He uses manual control methods (avoiding the use of herbicides), and promotes vigilance, persistence, patience, education, respect, cooperation, and humility when working with invasive plants. I visited another parsnip site with Mike later that day. This was a hayfield and meadow edged with a large stand of parsnip. Mike was dressed in pants, long-sleeved shirt, rubber boots, gloves, hat, and sunglasses—all better to protect his skin from an inadvertent contact with parsnip sap. I left Mike in the afternoon as he continued to pull parsnip, counting the number pulled as he went “62, 63, 64…230…500…” I was thinking: “Glad we don’t have this particular invasive plant in New Hampshire, yet." 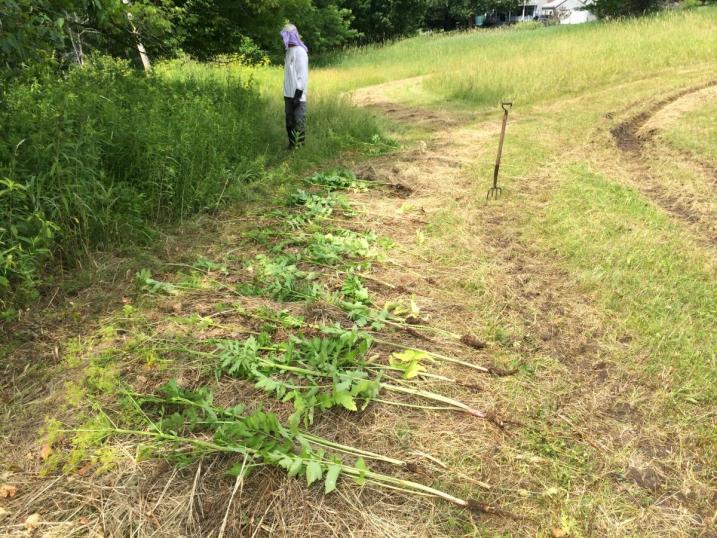 A few weeks later I was walking through the Oyster River Forest in Durham, New Hampshire, gathering information for a management plan that I was writing for this 170-acre town conservation area. As I emerged from the forest along the river into an old field, my eyes went wide with surprise, and I am sure I said: “oh crap!” There in front of me was a stand of wild parsnip; some plants were over my head in height. 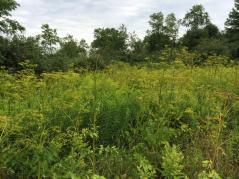 There is a phrase in the invasive plant control world: “early detection, rapid response,” which suggests that a prompt and

coordinated response to a newly discovered invasive infestation reduces cost with less environmental damage than if the species becomes well established. My first reaction to my parsnip discovery was to email Mike Bald to say, “I just found a large population of wild parsnip.” He replied, “How large?” I said, “It covers about 1 acre and maybe several hundred plants, although I did not count stems.”

Because of my visit with Mike earlier in July, I knew that this parsnip population could be controlled by manually pulling the second year flower stalks. Mike was available to come over to help. The Town of Durham was on board with this approach and the Natural Resources Conservation Service had funding to support our efforts. Within two weeks of my discovery Mike and I were on site, pulling wild parsnip. 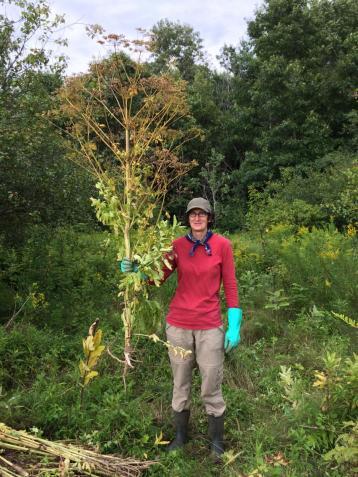 At first I was nervous about handling the parsnip, worried about touching the plant to my skin. After my first few pulls though, I gained confidence, and soon I was pulling big plants that towered over my head. We made three piles of plants with all the seed heads facing in. One pile was placed on pallets to allow faster drying of the plants. We covered another pile with a tarp. In another experiment we covered a particularly dense area of first year parsnip with a 25’ x 10’ plastic sheet to “solarize” the plants. We will need to return next year to pull more plants, as the seeds remain viable in the soil for at least 4 years. 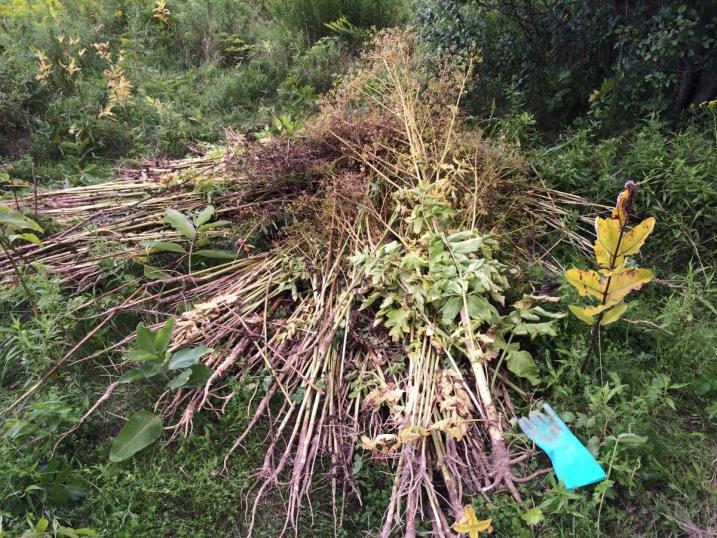 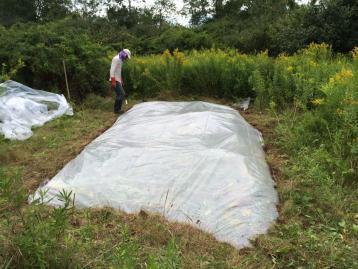 After two full days (one week apart), Mike and I together pulled 3,741 plants. Okay, that is way more than my original several hundred plant estimate. Next year we will return in early July to pull plants, before the plants have gone to seed and grow so tall. Some of the plants were growing among multiflora rose bushes and blackberry brambles and there were ground bees to watch out for. It was a difficult, but rewarding experience.

The good news is that parsnip sap is unlike poison ivy, which is an oil, so it won’t linger on clothes, pets, or equipment. You must come in contact with the sap in the sun in order to get the burn. The unbroken stems or leaves do not exude sap, but it is still best to pull parsnip on cloudy days and have no exposed skin.

Keep an eye out for wild parsnip, especially here in New Hampshire, where we are still in “early detection” mode. Let’s stop the spread before another invasive plant gets away from us. I'm already looking forward to my next parsnip pull. Hope you will join me.