Pulling Dandelions in the Clouds 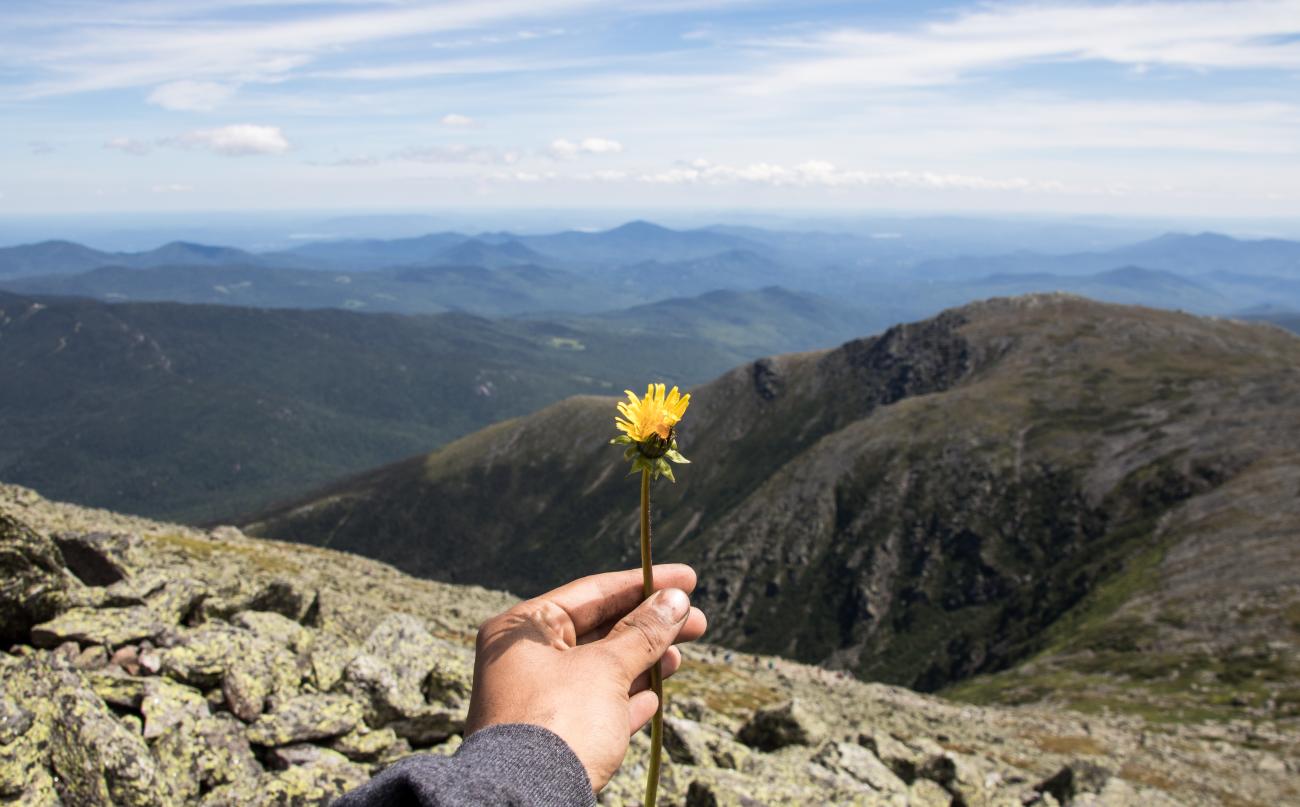 In July I participated in a volunteer workday at the summit of Mt. Washington in Pinkham Notch, sponsored by New Hampshire State Parks. As part of a coordinated effort between NH Natural Heritage Bureau, US Forest Service, and New Hampshire State Parks, volunteers are sought each year to help remove invasive plant species from the summit and surrounding White Mountain National Forest. The removal of invasives helps protect the fragile plants of the alpine zone. Dandelions were our target on this particular day. I was there to help pull the plants alongside other volunteers, take photos of our activities and the breathtaking landscape, and spread good Nature Groupie vibes.

When I arrived that morning, the sky was a brilliant blue with white puffy clouds. I parked my car at the base of the Auto Road near the maintenance sheds and stepped out to look around. Mount Washington and the surrounding peaks were in view and cars were lining up at the Auto Road gate. It was the start of a perfect summer day, but anyone who has traveled to Pinkham Notch knows that the weather can change in an instant - hence Mt. Washington’s nickname, “Home of the World’s Worst Weather”. As I grabbed my hiking bag from the car, I was sure to check for my fleece jacket and windbreaker. I love Mount Washington and the surrounding peaks, spending many days year round hiking and enjoying the State Parks and National Forest. I had been up to the summit many times in the summer when the base was bathed in sunshine and warmth, while the summit was socked in, rainy and sometimes even snowing. In fact, this was the rescheduled date for this volunteer workday as it had been cancelled the week prior due to extreme weather and wind gusts up to 70 mph. The weather today was predicted to be fair and breezy, and so far it was holding up.

As I was locking my car, a few other volunteers began arriving. We introduced ourselves, affirming we were in the right place, and made small talk about the beautiful start to the day as we all looked towards the peak. We gathered to learn about our agenda around the two NH State Parks vehicles that would take us to the top. Our leaders for the day were Patrick Hummel, Volunteer Program Manager in the Department of Natural and Cultural Resources at New Hampshire State Parks, and Amy Lamb, Ecological Information Specialist in the Natural Heritage Bureau at the New Hampshire Division of Forests and Lands. Patrick spoke for several minutes about the features of the State Park at the summit of Mt. Washington, followed by Amy’s presentation on why the removal of dandelions was necessary around the summit cone. Amy explained how the invasive yellow flower could potentially harm other plant species that are part of the rare native alpine plant communities growing in the Presidential Range.

Patrick described the State Park, about 60 acres containing the summit of Mt. Washington, and outlined our journey to reach the top and back again. Mt. Washington is one of 48 peaks in New Hampshire rising over 4,000 feet. Its 6,288-foot summit is the Northeast’s highest peak and is located about 25 miles north of North Conway in the White Mountain National Forest. On a clear day, one can see over 120 miles to Maine, Vermont, Boston, and even the ocean. At the summit, the Sherman Adams building houses the Visitor Center and the Mount Washington Observatory. In order to reach the top, we would travel via the Auto Road, an 8 mile trip from the Glen House on Rt. 16 in Gorham, NH. It’s about 30 minutes to get to the top, and the scenery constantly changes as you travel along the winding, narrow road that has been been an attraction since 1861. The return trip would take 45 minutes or longer due to the need to pull off the road to cool the brakes every 10 minutes or so. But each stop was an opportunity to take in the landscape and panoramic views to the north of the Presidential Range.

At the top we were each given a dandelion weeder tool and a trash bag. Amy walked to a nearby patch of dandelions, carrying her dandelion weeder to demonstrate proper removal of the plant and roots. The goal was to remove the entire root, along with the leaves and flower if there was one. Additionally, we wanted to carefully remove any flower that had a seedhead, the distinctive white puff showing a dandelion had gone to seed, so as not to release more seeds on the wind. The wind could carry more seeds across the meadows, and potentially to nearby peaks. Patrick said that it’s possible volunteer efforts could successfully remove all the dandelions but they will likely continue to be on the lookout for the flower.

For several hours the other volunteers and I weeded out the dandelions from various spots around and in between rocks and meadows. Amy would record where each bag of plants was collected, writing on each bag as well as a chart. She would take the bags back to her office to weigh them and compare with the amount collected in prior pulls. Preliminary data showed that there was a slight decline in the amount of plants collected, but more data was needed to determine if the pulls would have a lasting effect on eradicating the dandelions from the mountaintop. Amy told us the number of flowering dandelions have started to decrease and the overall weight of dandelions pulled have significantly decreased. “That means the plants are getting weaker and weaker,” Amy said.

Our group of volunteers were all ages and hiking abilities, and Patrick and Amy were able to accommodate us with pulling locations near the parking lots and well off-trail around the summit. When speaking with other volunteers who I worked side by side with for several hours, I wanted to learn what attracted them to the volunteer event that day. Several told me they enjoyed volunteering, but it was the opportunity to be on the summit of Mt. Washington on a summer day that drew them to sign up. Others were lifelong volunteers for nature and wanted to help control invasive species. One couple enjoyed hiking and traveling all over the US, but spent many of their vacations in the White Mountains and wanted to give back to a place they love. One intriguing answer was from a couple who had studied the medicinal potential of dandelions, and happened upon the volunteer event listing by chance while researching the plant. 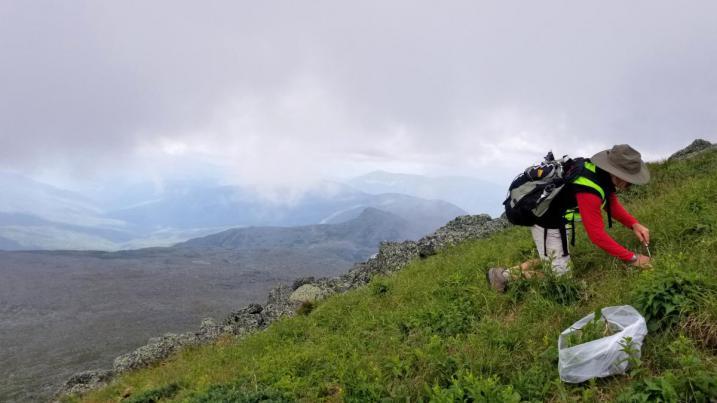 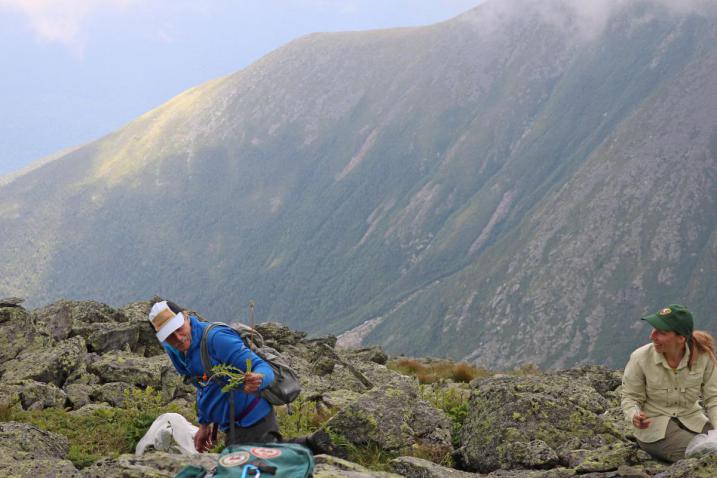 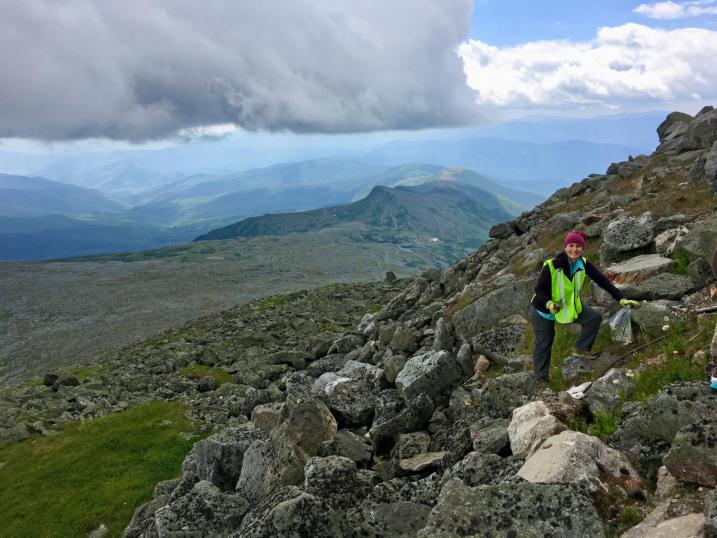 In between weeding and chatting, I was snapping photos of volunteers, plants, and the ever changing clouds and light on the landscape. The clouds hung around through most of our time on the summit. Every few minutes the clouds would open up and reveal the distant peaks and lakes, and I would quickly grab my camera for a snap. In the last 30 minutes before we were preparing to leave, the summit cleared. It allowed us just enough time to snap several shots of the group with our full dandelion bags, with Wildcat Mountain and Tuckerman Ravine against the sky as our backdrop. 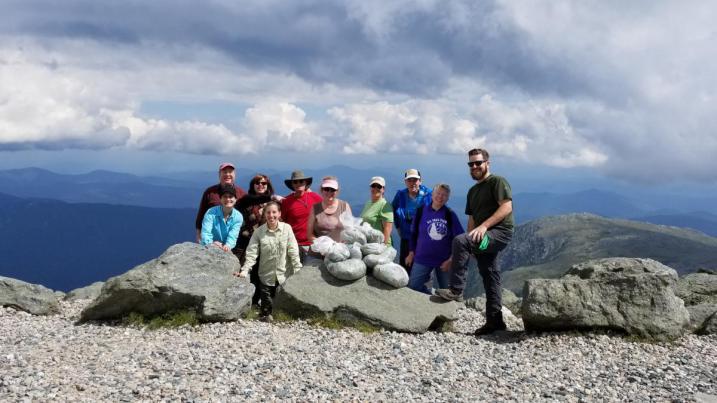 My goal for the day was to learn more about how the dandelion was affecting the growth of native alpine plants. It was a treat to work alongside Amy who pointed out and identified several different tiny native plants between the rocks. I enjoyed learning about the roles of the State Park employees, and had the opportunity to discuss the various organizations working with Patrick on the drive up and back from the summit. I was drawn to the opportunity to work with a diverse group of volunteers who respect the environment and want to learn how to preserve it. I hope I can join them again to pull dandelions among the clouds.

For more cool volunteer experiences like this, volunteer through [Nature Groupie Experiences]!