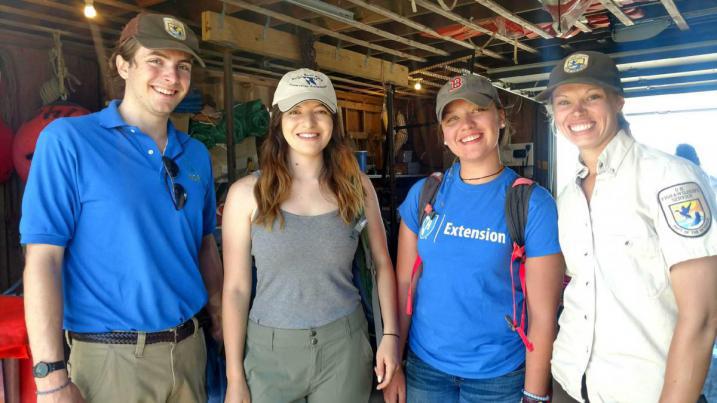 I had the pleasure of spending the first two weeks of my Stewardship Network: New England internship with the U.S. Fish and Wildlife Service (USFWS) based at Parker River National Wildlife Refuge (NWR), in Newburyport, MA. I worked with Nancy Pau, as well as the rest of her biology staff and interns on various projects. The Parker River Wildlife Refuge is incredibly beautiful, from the vast salt marsh to the sandy beaches. This was my first time in this area and clearly I had been missing out!

First, I helped Nancy prepare for a salt marsh workshop hosted at the refuge headquarters for members of local conservation organizations and agencies to gather and discuss the ongoing problem of salt marsh degradation, and to brainstorm how they plan to combat this issue. I learned a lot from this workshop, and it was a nice way to observe conservation professionals coming together to work towards a common goal!

While the afternoon discussion portion of the workshop happened at headquarters, I got to go to the beach with Kaytee, a biotech for USFWS, and Dawn, another intern, to put exclosures on piping plover nests. Piping plovers are little shorebirds that are federally listed as "Threatened" in the Northeast and "Endangered" in the Great Lakes Region. Parker River NWR has a population of plovers that nest on their beaches, and they do their very best to protect them, which includes closing specific beaches and putting exclosures around some of the vulnerable nests to protect them from predation.

During my days in Newburyport, I learned how to do a nekton survey, which involves catching aquatic organisms (nekton) in marsh pools, as well as how to do a tern nesting survey by boat.

I also had the opportunity to accompany Kaytee and two Student Conservation Association interns, Makenzie and Collin, on a trip to Thacher Island National Wildlife Refuge off the coast of Rockport, MA. The USFWS owns approximately one third of the island and the other two thirds are owned by the Town of Rockport. Members of the Thacher Island Association welcomed us to this gorgeous island and then we began gull control on the shoreline. By gull control, I mean we located nests and poked holes in the eggs in order to terminate them (all while being screamed at, dive bombed, and pooped on by the gulls). This is done twice a year on Thacher in an effort to control the population in the hopes that terns may be able to be reintroduced to the island without being outcompeted by gulls. There are two functional stone lighthouses on the island, so after we finished gull control, we were able to climb to the stairs to the top of one of them! The view was incredible, you could even see the Boston skyline!

In addition, I spent time with David, an invasive plant species specialist, and other interns, pulling perennial pepperweed. Pepperweed is an invasive plant that grows near the edges of roads and marshes. It runs rampant through the Great Marsh, although eradication isn’t a realistic option, the USFWS and other conservation organizations in the area do their best to control the population yearly.

Great Bay National Wildlife Refuge in Newington, NH is also under the administration of Parker River NWR. This area has a rich military history, but it is now used for a variety of different projects and there are also two very nicely maintained trails that are open to the public. NH Fish and Game has two enclosures for New England cottontails set up at Great Bay NWR in what used to be the weapons storage area. The New England cottontail relies on extremely dense shrubby habitat, and habitat degradation had posed a huge problem for their already  struggling populations.

One morning, we met with Heidi and Dan from Fish and Game to check traps that they had set up in one of the enclosures in the hopes of trapping young cottontails and gathering data from them. We didn’t have much success in trapping the babies, but we did trap an adult. It was pretty cool to see a New England cottontail up close and personal! For the rest of that day, I had the opportunity to use one of the USFWS vehicles to explore the rest of the refuge that is closed to the public. I was amazed by the diversity of habitat types for wildlife!

I had a fun ending to my time with the USFWS, helping out at their free annual family event, “Let’s Go Outside!” During this event, stations are set up with activities at headquarters as well as throughout the refuge, including surf fishing, archery, kayaking, and plenty of arts and crafts. The biology team ran the archery station, so I spent my day teaching people of all ages how to shoot a bow and helping out with the arts and crafts.  This is a great event with something for everyone and I would recommend checking it out next year!

I had an amazing few weeks with Nancy and her crew, and I can’t wait to work with them again in July, but I’m excited to see what these next two weeks with the Trail Finder project will have in store!

Thanks for reading, stay tuned for more stories to come!