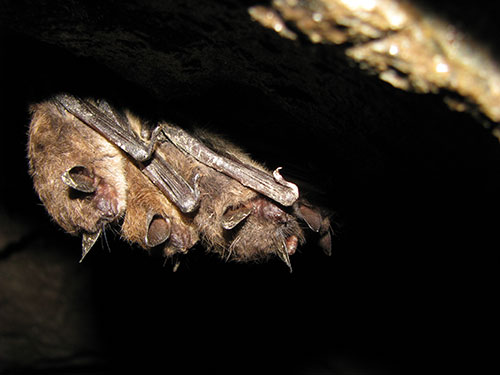 This past summer, a team of 25 intrepid Bat Volunteers drove back roads across the state to conduct surveys of foraging bats. In all, they surveyed 24 routes, with eight being surveyed two to four times for a total of 43 surveys.

Using sensitive equipment to record high-frequency sounds and an accompanying GPS logger, each volunteer drives slowly along a 20 to 30-mile long route during the first few hours after sunset, when bats emerge from their roosts to feed on night-flying insects. Data are analyzed to create maps showing each site where a bat was recorded. Some species have distinctive calls, whereas others sound too similar to tell apart are listed as species groups. “Unknown” calls are those that were not clear enough to identify a particular species or species group. The map shown here, a composite of two survey nights, shows where species (or species groups) were recorded. 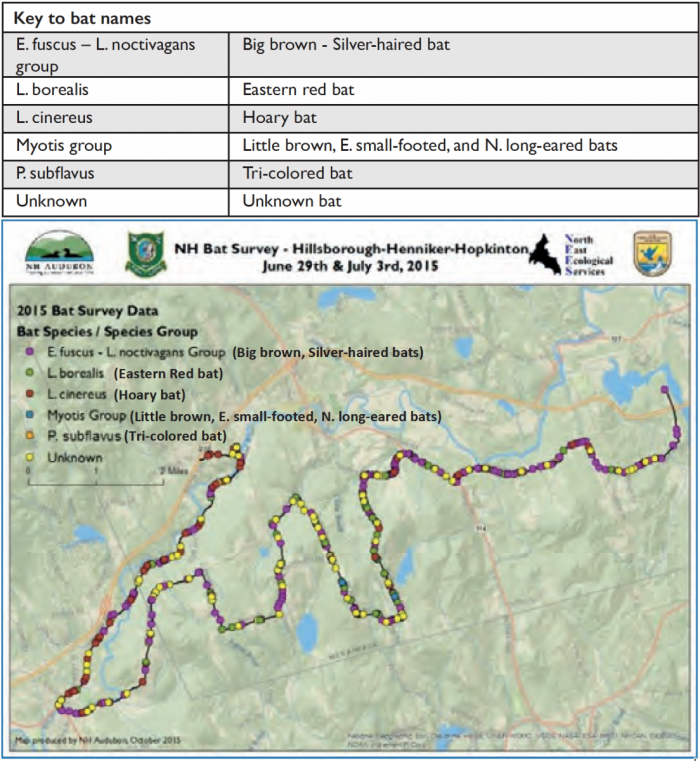 Of the eight species of bat found in New Hampshire, results indicate that the most frequently recorded species are the Hoary, Red, and Silver-haired (or Big brown) bats. These migratory “tree” species roost in trees, often well away from barns and other large buildings. In contrast, Big brown bats roost in structures, often foraging in areas close to buildings. Not surprisingly, very few Myotis (cave-hibernating) species were encountered, reflecting the devastating mortality caused by white-nose syndrome (WNS).

Another group of volunteers spent their evenings conducting counts of bats emerging at dusk from barns and other buildings. All of these bats were female Big and Little brown bats, which roost in large maternity colonies in warm, dark places where they give birth and raise their young. Counting bats zipping in and out of dark structures in low light is tricky work, but volunteers were able to gather data at 25 colonies over the summer. Because many colonies have declined dramatically or been wiped out completely, it is critically important to identify and protect those that remain.

The surveys conducted by the NH Audubon Bat Volunteer program generate data that is essential for bat researchers and managers in their efforts to protect bat species.