Keeping the "Great" in the Great Bay 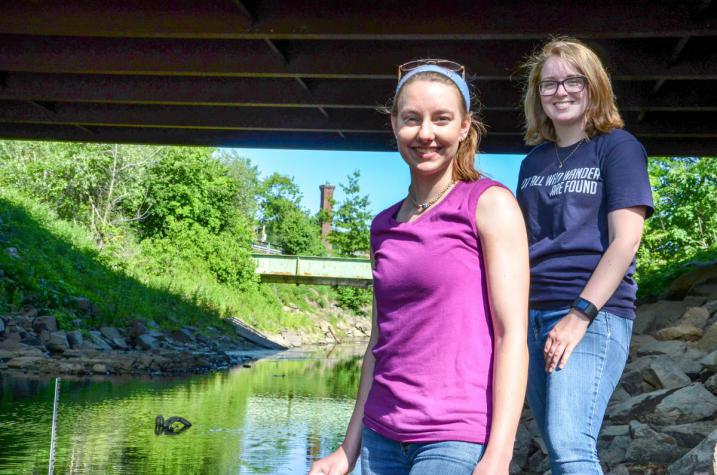 When I first came to the University of New Hampshire (UNH) last fall I remember being amazed by the Great Bay. Every time I took the bus from Durham to Newington or Portsmouth I watched out the window at the sparkling water under the bridge. At the time, I didn’t realize that the rivers, marshes, and lakes that I passed were all part of one big body of water, the Great Bay Estuary. It wasn’t until this summer when I started work with UNH Cooperative Extension’s the Stewardship Network: New England (now called Nature Groupie), NH EPSCoR, and a team of UNH researchers that I developed a greater appreciation and understanding of the Great Bay. However, with this new understanding also came concern for its health.

The Great Bay Estuary is designated by the U.S. Environmental Protection Agency as one of only 28 “Estuaries of National Significance.” Despite this lofty title, as of 2013 the Great Bay Estuary showed 12 of 16 negative environmental indicators. When I learned this, I thought back to the sparkling water and wondered how this could be true.

As soon as the spring semester ended our research team of UNH professors and interns set out to better understand the dynamic systems that occur in the Great Bay and their influence on its health. An important part of the research we’re doing in the Great Bay is related to the oyster fishing industry. These fishermen and oysters depend on the health of the Bay. If the health of the Bay continues to decline, it threatens their livelihood and further endangers the Great Bay oyster population. Oysters are a key component to the health of the Bay, as they are able to filter the water and provide habitats for marine life. They are indisputably one of the most important creatures living in the Great Bay and without them, it would become very difficult to keep the water safe and clean for all other life living in it and depending on it.

The first step in our research project was to decide where and when to sample, what we would be testing for, and the roles each of us would play in the project. My role in this project is to engage volunteer citizen scientists in the research we’re doing through UNH and NH EPSCoR. With the help of my team I have organized the Great Bay Summer Storm Watch. Storm events cause more water to flow through rivers and streams and into the Bay and may be an additional source of contamination and sediments. The frequency of storm events in New England is predicted to increase and now more than ever it is vital to understand the effects that storms have on the Great Bay ecosystem. In order to show volunteers how they’ll collect water samples and help our research, I first needed to do some testing myself.

I accompanied the UNH scientists on site visits to determine where the saltwater from the Great Bay met the freshwater from the watershed. The purpose of this was to separate the freshwater component of this project from the salt water in order to discover which had a larger influence. This combination of salt and fresh water is what makes estuaries so special, as it creates a very unusual habitat for the plants and animals that live there. Trekking through salt marshes and ducking under tree branches in the woods, we studied the extent to which the Great Bay reached.

Since then, I’ve learned a couple of things about how to take samples and make measurements that I can share with our citizen scientists. You may be wondering how we were able to tell where the fresh water became salt water. This is thanks to a device known as a conductivity meter. This device measures how easily an electrical charge passes through the water. We can tell how “salty” the water is from the meter’s unique conductivity measurements. Another important measurement we take is dissolved oxygen. If a body of water has too much oxygen, then it will release it back into the atmosphere. This can occur when there are a lot of plants in the water. The dissolved oxygen in the water is used by organisms such as fish and plants, but if there is too little dissolved oxygen plants and animals in the water will die.

At each test site we also took two water samples using bottles. One sample is filtered for bacteria living in the water. The other is filtered for suspended sediments, which bacteria are able to live and thrive on given the right conditions. The only tricky thing about taking samples for bacterial analysis is that you don’t want to contaminate the bottle with your own bacteria. When the bottle is submerged, it is vital to keep your hand out of the way of the opening and face it upstream. Suspended sediment samples also have specific sampling requirements. It is important that the bottom of the river is undisturbed to ensure that sediment levels in your sample indicate the levels in the water alone. Once the sample is taken it has to be kept cold and tested right away. The testing is performed by UNH researchers at labs on and off campus. By keeping the samples cold it ensures that the contents of the sample is the same as when you took it and no microorganisms can die off. The contents of the bottles are filtered and then tested for bacteria by culturing the contents of the filter to see what grows.

If you want to help us study the Great Bay’s ecosystem and better understand how much of an impact storm events have on the Great Bay, sign up to become a UNH Storm Watcher! There will be a training for those interested on June 30th at 5:00-6:30pm in Durham, NH. We hope to see you there!

If you want to help the Great Bay, but water quality sampling just isn't your thing, check out the experiences on Nature Groupie for other volunteer opportunities around Great Bay.