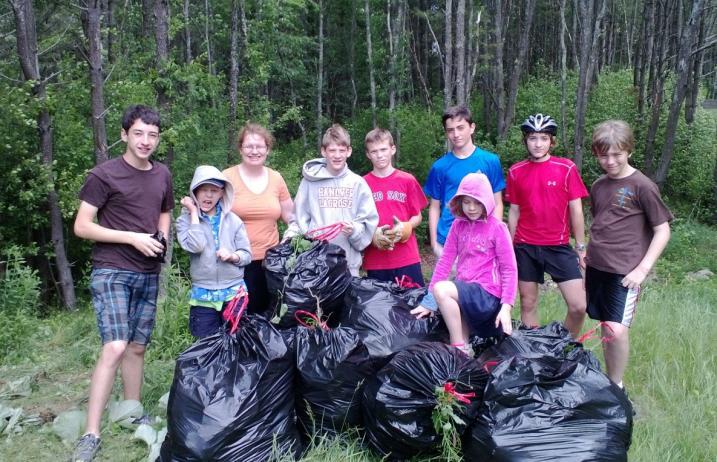 In late April, 50 people from 14 towns assembled at the Howe Library in Hanover, New Hampshire for a Garlic Mustard Muster. The event, organized by the Hanover Biodiversity Committee, Upper Valley Land Trust, and volunteers from the Towns of Lebanon (NH) and Hartford (VT), gathered local community members and invasive experts to rally help and chart a course for battling the invasive garlic mustard in spring 2014 in the Upper Valley of New Hampshire and Vermont.

Barbara Mcilroy, a member of the Hanover Biodiversity Committee led off the Muster with an overview of the devilish features of this aggressive invader: it emits chemicals that suppress growth of native tree seedlings and wildflowers, the seeds remain viable in soil for many years, it is a prolific seed producer with the ability to colonize areas with self-fertilized seeds, and it has no natural predators in our region.

After hearing about the sense of urgency of battling garlic mustard from Mcilroy, the energized crowd divided into four groups to explore and discuss broad strategies and techniques for specific situations.

Education is key, as people, especially landowners, land care providers and town public works staff, need to know that garlic mustard is a problem. Volunteers in the Upper Valley have many years of experience controlling garlic mustard and suggest the following as effective outreach tools: displays with handouts and live plants, informational signs placed in garlic mustard patches along trails, and neighborhood pulling parties. This loose coalition created two popular handouts on garlic mustard: a bookmark and a poster of the plant's 2-year life-cycle. 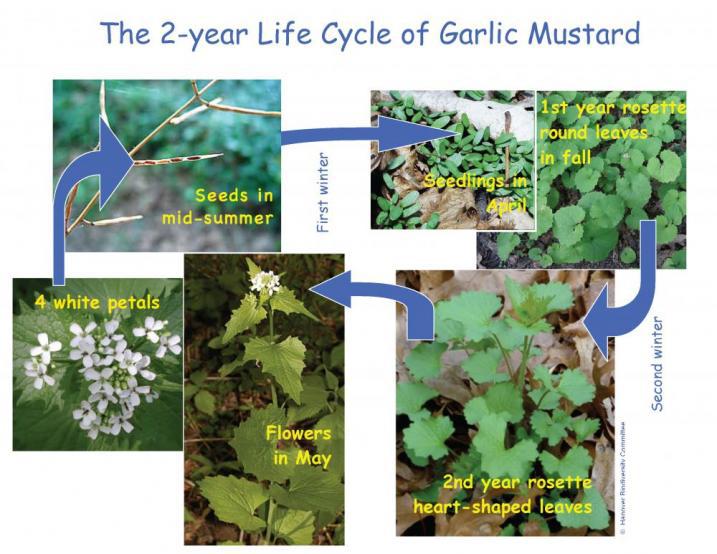 After the muster, volunteers fanned out across their communities to pull garlic mustard in May and June, before the plant went to seed. The Town of Hanover reported on a successful technique engaging hikers along the Girl Brook Trail. Garlic mustard information and a request for help were posted on the main kiosk at the trailhead. Two moveable signposts were placed in patches of garlic mustard along the trail with a "LOOK carefully" poster and plastic drawstring trash bags were hung from the post. Hikers were asked to pull a few handfuls and put them in the bag. From May 29 to June 15, people who passed by pulled ten 30-gallon trash bags. It was deemed a great success, and Mcilroy plans to try this technique with other invasive plants. 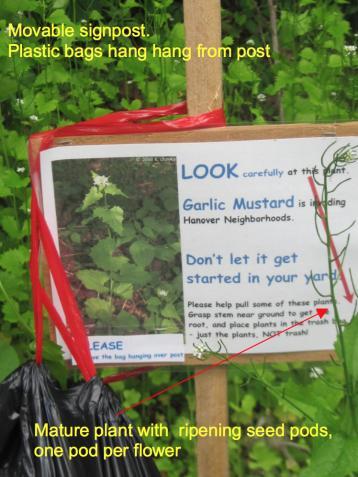 At the April Muster, participants also learned about reporting and tracking invasive populations using Smartphone Apps such as IPANE, how to handle large populations, tracking infestations along roads and trails, and promoting neighborhood parties. Everyone left the Muster with a bundle of tools to help us collectively tackle the garlic mustard challenge.