Citizen Science Success: City Will Close Roads for Amphibians Based on Volunteer Data 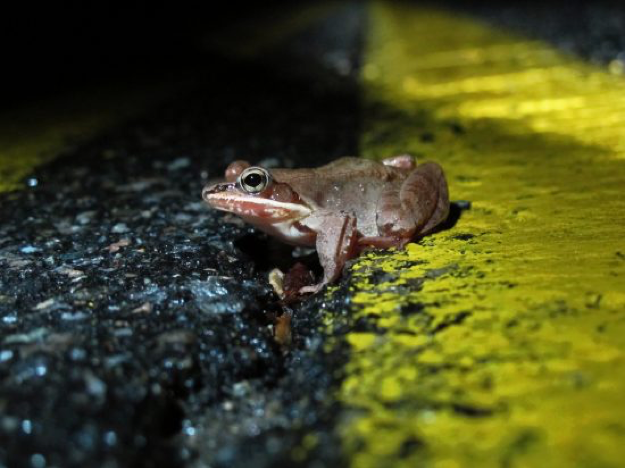 A wood frog makes her way across North Lincoln Street in Keene, New Hampshire. This year, she’ll have a little extra help.

Every year, on the first warm, rainy nights of spring, thousands of amphibians make their way to vernal pools to breed. Many are killed when they must cross busy roads. Since 2006, citizen science volunteers with the Harris Center for Conservation Education's Salamander Crossing Brigades have moved 35,000 amphibians to safety at dozens of road crossings throughout the Monadnock Region in southwest New Hampshire.

Recently, more than 30 volunteers from the Salamander Crossing Brigades program attended a public meeting – many dressed in the reflective vests worn during their nighttime work with amphibians – to express their support of a temporary road-closure proposal aimed at protecting migrating frogs and salamanders. Their comments and letters made an impact on the Keene City Council, who voted unanimously in favor of closing the North Lincoln Street amphibian crossing site to vehicle traffic during the first rainy nights of spring (called “Big Nights”). Closing the road at the site of the amphibian crossing will ensure the safety of migrating amphibians as well as the many families who come out to witness the migration each spring.

Keene is the first community in New Hampshire to institute such a measure. This decision was based in large part on data collected by, and a strong show of support from, our Salamander Brigade volunteers. Over the last ten years, this citizen science program’s volunteers have helped 9,242 live amphibians across the road at the North Lincoln Street site, and counted 1,632 dead.  It’s important to note that these numbers are underestimates of amphibian activity at North Lincoln Street, as volunteers typically head home before midnight, but the amphibian migration – and resulting roadkill – will continue all night if weather conditions are right. Studies at other sites have shown that it doesn’t take a lot of cars to do a lot of damage.

In the coming month, City of Keene staff will be working closely with the Salamander Crossing Brigades program to implement the road closures at North Lincoln Street. Road access and parking will change a bit at that site on Big Nights, but the critter counts and salamander spot pattern photographs will continue, for continuity of scientific data and so that the program can report on how many amphibians benefited from the decision to close the road.

Closing one short stretch of road for a few nights each spring may seem like a small thing, but to the thousands of amphibians who call the Robin Hood Park ecosystem home − and to all of the Salamander Crossing Brigade volunteers who have helped shepherd them to safety year after year, including everyone who came out to the standing-room-only meeting in support of the road closure proposal − it’s really not small at all.