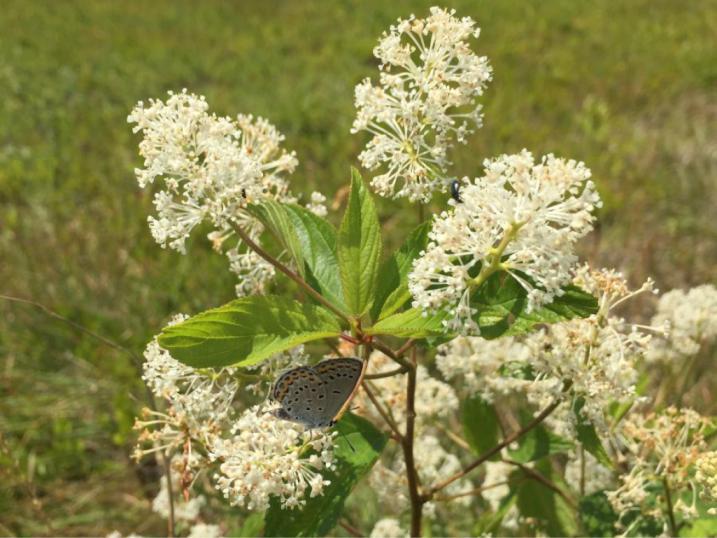 Following my work with UNH Woodlands I had the pleasure of working with Phil Auger once again for Bear-Paw Regional Greenways.  Bear-Paw is another land trust in southeast New Hampshire that holds many conservation easements.

We did more boundary work for Bear-Paw's properties, similar to what we did for Southeast Land Trust.  We walked the boundary line and put up flagging and signs to indicate property lines and ownership.  We would throw on our bright vests, with our GPS, compass, camera, binoculars (for wildlife watching, of course), and rubber boots (because you never know where you'll end up!), and we would head out into the woods to walk a property--one was 300 acres!  Dan Kern, the head of Bear-Paw, also had me take pictures along the boundary as baseline documentation for the properties.  After walking the properties, I made up reports of the pictures for Bear-Paw's records.  I also went back to Evans Mountain in Strafford with Dan and Phil to meet with people from the town to discuss the possibility of a new public trail.  We hiked the proposed trail and tried to find the best route.

I then had the opportunity to work with NH Fish & Game for their Nongame and Endangered Wildlife Program.  I worked under Heidi Holman, who is in charge of the Karner Blue Butterfly and New England Cottontail projects.  The Karner Blue Butterflies are increasing in number in New Hampshire due to diligent habitat work and captive breeding.

For this project, we started the mornings in the butterfly lab to inventory the larvae and adult butterflies.  We were even able to release some into the wild when we went out for habitat monitoring.  There are transects set up throughout the Karner Blue habitat in Concord that are monitored frequently.  We walked the transects and documented a count of butterflies we saw and took an inventory of the nectar and lupine plants.  The lupines are necessary for Karner Blues, as they use them for both food and for laying eggs.

It was very rewarding to see wild Karner Blues after releasing so many and working on their habitat. There is still a lot of work to be done, but the project is scaling back a bit because they have been so successful!

To start off on the New England Cottontail project, I drove down to Rhode Island with Brett Ferry, who is the Fish & Game Bio tech working on the project, to pick up some rabbits.  The Roger Williams Park Zoo in RI runs a captive breeding program for the rabbits and distributes them throughout New England.

This year, the survival rate for young in the program is very low.  We brought two pregnant females from the zoo to a one-acre pen in the Great Bay National Wildlife Refuge with the hope that the rabbits will take better care of their young in a natural habitat.  They require a very thick early-successional habitat with dense cover.  Brett released one, and let me release the other one!  Once they figure out how to get out of the carrier, they are quick to go, and provide no opportunity for good pictures!  Before releasing them, we had put radio collars on them so that we can track their activity, and we have been checking back in frequently!

We worked on getting more pens set up in the wildlife refuge for future rabbits.  We also put traps out in their habitat in Londonderry.  We covered the traps with cardboard to provide some shade and to prevent predators from getting curious.  We also put apples inside the traps to attract the rabbits.  Brett plans to put collars on as many as he can trap so that he can track their activity.  He hopes to get a better idea of how the rabbits move between patches and the dispersal of young from their birth area.

It was fun to work with Phil again for some property work and it was rewarding to release endangered species into their natural homes!  I look forward to more fun projects with Bear-Paw and NH Fish & Game before the end of the summer.  I will also be mapping trails with Emma Tutein for TrailFinder in the coming weeks!