Stewardship Tip: What We Know About Glossy Buckthorn 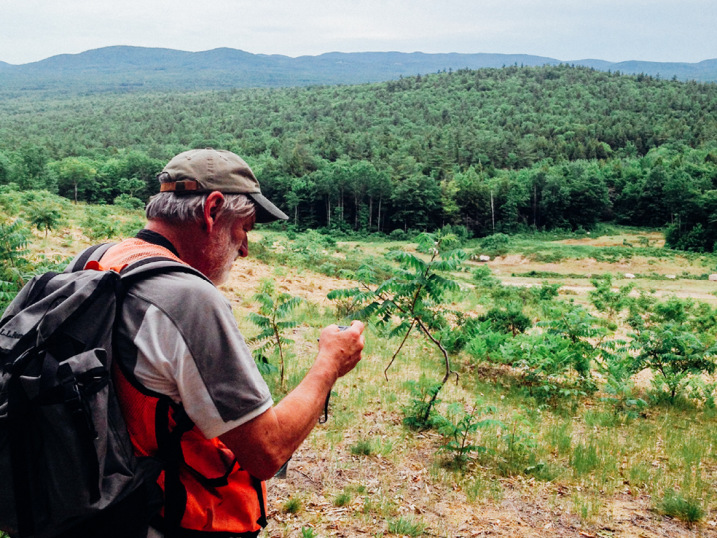 Adapted by Karen P. Bennett, Extension Forester at UNH Cooperative Extension, based on a discussion with Dr. Tom Lee where the prevailing wisdom was we don't have much useful information about glossy buckthorn. Dr. Lee disagreed and wrote the following "field note":

I think we actually do have some useful information for land owners and land managers. Bill Leak, in his recent compilation about nuisance plants, pointed out some good generalizations, and I believe we can add to these.

What we know: White Pine

We know that buckthorn loves to come in under canopies of eastern white pine (lots of papers note this, e.g., Koning and Singleton 2013) and that sites close to land with an agricultural history are more likely to be invaded than other sites (Johnson et al. 2006). We know that the presence of buckthorn under pine is not just a legacy of old field history; buckthorn is quite capable of regenerating from seed under an established white pine canopy (Lee and Thompson 2012).

If you own a stand of white pine not yet invaded by glossy buckthorn, occasional reconnaissance and quick response to invasion will save a tremendous amount of work down the line.

What we know: Openings

We know that buckthorn is aggressive in colonizing canopy openings, especially when it is already present in a stand or nearby. In invaded white-pine-dominated stands with minimal hardwoods, any opening of the canopy regardless of its size will greatly increase the density of rapidly-growing buckthorn (Lee and Thompson 2012). But buckthorn’s gap response is different in other forest types. In stands dominated by shade-tolerant species (e.g., eastern hemlock, probably beech and sugar maple) buckthorn is not successful in small gaps (those resulting from felling one to several trees), but readily colonizes and succeeds in group selection openings over ~0.1 acre (Burnham and Lee 2010).

Harvesting trees in a buckthorn-invaded white pine stand assures you of more buckthorn after the cut and of consequent inhibition of regenerating trees (your future forest). You can harvest, but unless you take action to control buckthorn afterward, your next rotation may be longer. In stands dominated by shade-tolerant trees, management with single tree may avoid a serious buckthorn invasion. Of course, single tree selection is of minimal worth in beech or hemlock stands as it regenerates more beech and hemlock which have low commercial value. But single tree selection with sugar maple can be sucessful (Bill Leak has shown this in the White Mountain National Forest). Group selection, even in stands of shade-tolerant trees, could create a buckthorn thicket if there is a seed bank or seed source nearby.

What we know: Shade Tolerance

We know that buckthorn is moderately tolerant of shade. It grows well under white and red pine, readily regenerating from seed under these trees, and under open canopies of a few other species. It does not do well under hemlock and beech, and data from my lab suggest it fares poorly under mid-tolerant hardwoods, such as red maple, red oak, and black birch. Chelsea Cunard showed that mortality of established buckthorn plants is correlated with low light levels and high basal area of shade-tolerant trees (Cunard and Lee 2009). We think that buckthorn will decline as canopies become more dense and as mid-tolerant and shade-tolerant trees establish and then overtop the buckthorn stratum.

If you’ve got an older pine-hardwood stand in which understory tree regeneration is about to overtop the buckthorn layer, why not delay harvest a decade and let the trees do the work of eliminating buckthorn? You’ll have less buckthorn control work to pay for when you do finally harvest.

If you plan to let your woods grow to ‘old age’ without intervention, don’t worry too much about buckthorn in the understory. If your stand matures in classic New England fashion, buckthorn will likely get squeezed out (though it’s true it may take a while). If you do choose to control buckthorn and time the control to coincide with the ascendance of mid-tolerant and tolerant regenerating trees, you may have to do it but once. (Of course, some day in the far future a few of your big old canopy trees will die, creating huge canopy gaps that buckthorn will happily colonize.  But, by then, it will be someone else’s problem.)

Lastly, and I believe Bill Leak pointed this out but it is worth emphasizing, buckthorn eradication is close to impossible, and even localized control is expensive. Herbicides, uprooting, or repeated cutting can be successful but are costly, and the landowner must be persistent. Steve Eisenhaure, UNH Land Use Coordinator, has been doing a lot of work on controlling high-density buckthorn and it is challenging. Buckthorn’s ability to re-sprout after repeated cutting coupled with prolific seed production and seed dormancy mean that once you have buckthorn thickets on your land your options are limited.

High-density buckthorn is difficult to control, but many volunteer workdays employ large groups of volunteer hands to make an impact. Get email from Nature Groupie to learn when you can volunteer.