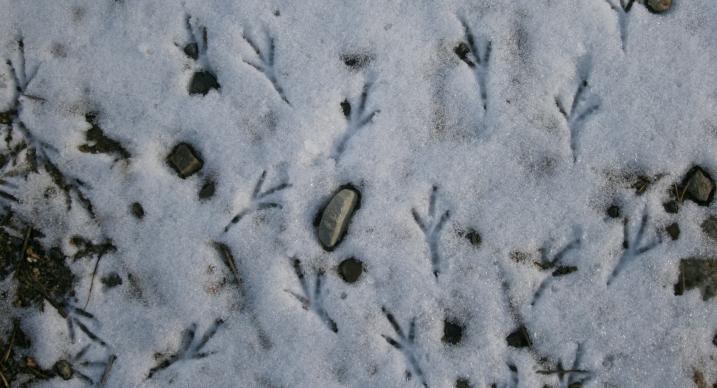 Winter is my favorite time of year to watch birds. On good winter days, when the air is crisp and silent, the hardwoods bare, I hear and see birds more clearly. In the woods I listen for the tapping of a downy woodpecker, soft chattering of chickadees and titmice in a mixed flock, or boisterous blue jays screaming jaaaay. From December through March—when I have the bird feeders up—I enjoy the antics of visiting birds as I watch from my window, in good weather and bad. Sometimes in winter I’m fortunate to see a majestic bald eagle soaring beneath a clear blue winter sky.

Dave Govatski of Jefferson is one who takes part in these and more. Dave leads or participates in four Christmas Bird Count routes in northern New Hampshire and watches his backyard birds for the Cornell Lab’s international Great Backyard Bird Count and New Hampshire Audubon’s Backyard Winter Bird Survey. Govatski said, “I like to get out on snowshoes in winter to see what birds are around, especially the finches, and usually there is a surprise bird or two.”

New Hampshire Audubon has monitored bald eagles in the state for more than 30 years. A bald eagle pair began nesting in New Hampshire in 1989 after a 40-year absence (a period when eagles nationally were decimated by DDT and habitat loss). Today, thanks to the leadership of NH Audubon and partners, the population has expanded year-by-year and now more than 40 pairs of eagles are reported during the breeding season. Many eagles also overwinter here, near large bodies of open water.

Chris Martin, raptor biologist for NH Audubon, monitors the bald eagle population with the help of volunteers. One such volunteer opportunity is the mid-winter bald eagle survey in early January, now in its 35th year. According to Martin, “This winter survey helps us monitor the growth and distribution of this species that is still recovering from the DDT era.”

Martin credits volunteers for their integral role in the winter eagle survey. “Without help from experienced volunteers, we would not be able to accomplish this work because it requires simultaneous observations from all corners of the state on a single day. The vast majority of the data we have contributed to the national count over the last 30 years comes directly from our winter-hardy field volunteers.”

The Annual Christmas Bird Count starts on December 14th.  According to National Audubon Society, the CBC organizer, this is the longest running Citizen Science survey in the world. Thousands of volunteers across the country venture out to count birds within 2,300 survey “circles.” In southeast New Hampshire, Kurk Dorsey of Durham has participated in Christmas Bird Counts since the 1980s. He said, “I most enjoy getting to know local conservation areas and noting changes in bird populations from year to year.” His personal highlight is finding a ruffed grouse deep in the woods most years. On finding the grouse Dorsey says: “It takes persistence, knowledge of their habitat, and a little luck.”

The backyard bird surveys offer another way for bird enthusiasts to watch winter birds and contribute to science, but from the comfort of your home. Check out the links above for these February events. You don’t have to be an expert in bird identification to join these surveys. You can partner with an existing leader on one of the eagle surveys or CBC circles or jump in with your own backyard bird survey.

Winter of sorts is here. It’s a great season to listen for and watch birds. Now If only we’d get some clear, crisp, winter days.