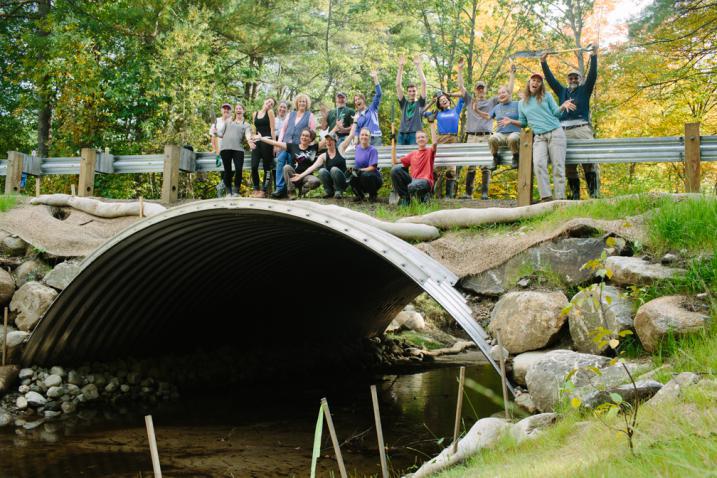 In early October, over 15 volunteers gathered on a quiet country road in Swanzey, New Hampshire to add the finishing touches on a stream restoration project that put citizen science into action. The sun was shining through brightly colored autumn leaves on an exceptionally warm day. Staff from the Harris Center for Conservation Education, Trout Unlimited, the Natural Resources Conservation Service, and the Cheshire County Conservation District were on hand to greet volunteers and provide an introduction to this unique project that had been years in the making. 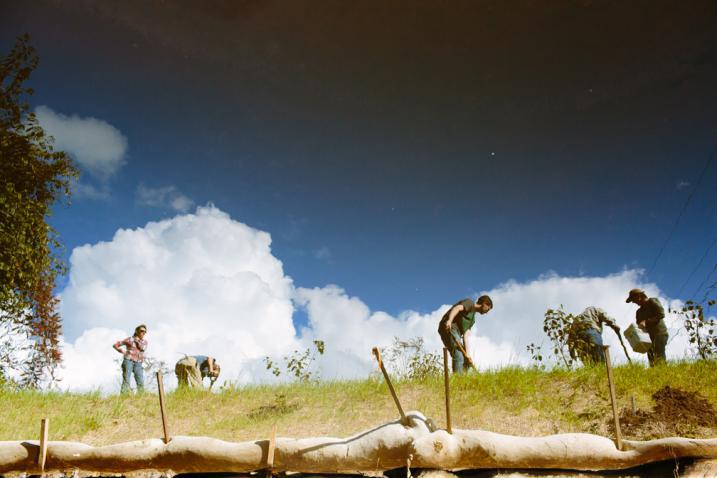 Volunteers are the bookends to the Falls Brook stream restoration project. Brett Thelen, Science Director for the Harris Center, said it all began 10 years ago with a partnership between the Nature Conservancy (TNC) and the Ashuelot Valley Environmental Observatory (AVEO), which is now the citizen science arm of the Harris Center. “80 AVEO and TNC volunteers surveyed more than 800 culverts to see where fish passage was most impacted by roads,” explained Brett. While culvert survey work could just as easily be completed by a paid staff or student intern, the inclusion of local volunteers offered long-term benefits in the form of community engagement and outreach.

The citizen science volunteers’ efforts to measure culverts addressed the reality that the northeastern US had experienced at least one 100-year flood every year from 2005 to 2009, according to TNC’s 2010 report of the project’s findings. Today, there is a growing awareness that culverts and bridges are not only potential barriers to wildlife movement, but also influence how well our infrastructure can withstand storms and runoff during heavy floods. 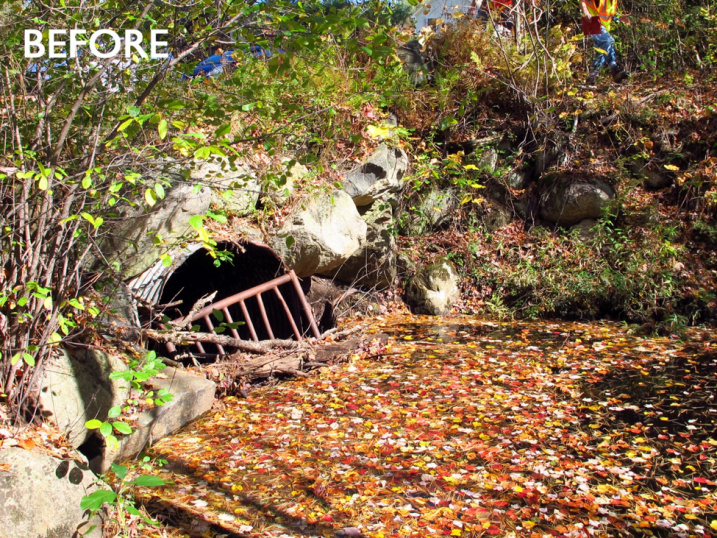 Rain that falls in yards, on roads, and in towns during a huge storm event will eventually make its way to streams like Falls Brook. Trout Unlimited’s Gabe Bolin explained that upstream flooding and the undersized culvert typically results in high flow velocities on the downstream side of the culvert and erodes stream banks and underneath culverts. The old culvert at Falls Brook was a 6-foot diameter pipe. To put that in perspective, the new structure is four times as wide. 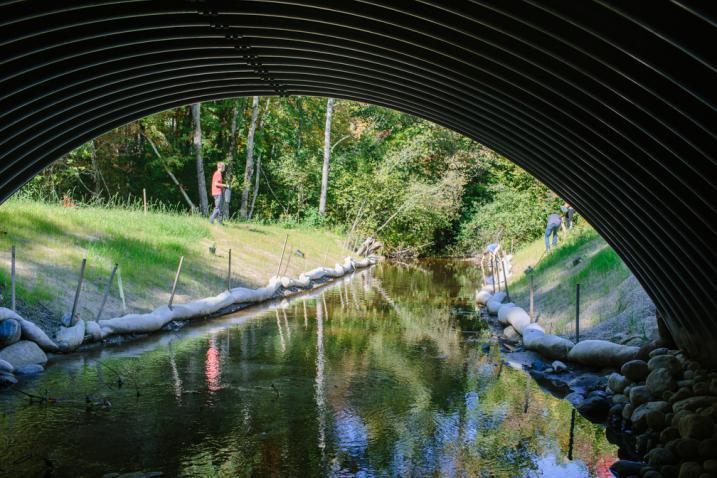 Trained volunteers surveyed road-stream crossings across the Ashuelot River watershed and over the next decade, their data became central to the Falls Brook restoration project. Collaboration was key as experts from Trout Unlimited, TNC, the New Hampshire Fish and Game Department (NHFG), and Antioch University New England looked at the citizen scientists’ findings and prioritized potential restoration sites.

Falls Brook rose to the top of the list because upstream from the culvert there is approximately 10 miles of high-quality brook trout habitat, and another 10 miles of similar habitat downstream. When prioritizing culvert upgrades, the amount of fragmented stream miles that can be reconnected is often evaluated, and it’s rare to reconnect that much by upgrading one structure.  Fish, like the brook trout, can now move out of the Ashuelot River and swim upstream to their headwaters to spawn. The wide arch crossing, Gabe adds, “also allows sediment that naturally erodes upstream to get carried downstream.” Natural erosion of sediment brings important minerals and nutrients to aquatic wildlife and also plays a large role in restoring eroded stream beds caused by the undersized culvert.

The volunteers’ data showed priority areas, but a team of conservation partners had to come together to make the project happen. The new stream crossing cost over $250,000, but the Cheshire County Conservation District helped convene partners and secure funding from the New Hampshire State Conservation Committee Conservation Grant Program (funds from the sale of the Conservation or “Moose” License Plate), the Town of Swanzey, the New Hampshire Department of Environmental Services Aquatic Resources Mitigation Fund, and NH Fish & Game.

A decade after the first culvert was surveyed, citizen science was put to action with the construction of the new Falls Brook crossing. After construction, the newly widened stream banks were seeded with grass, but lacked established vegetation to buffer the stream and stabilize the banks. 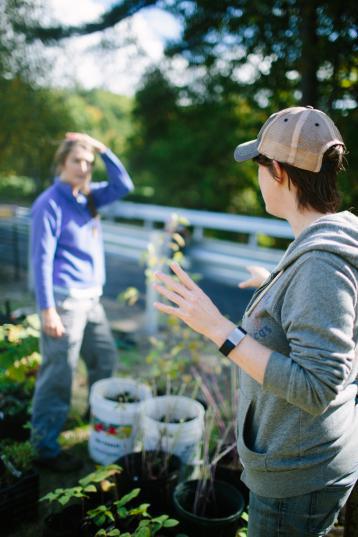 The stream bank was not destined for any old plants. Enter naturalist Russ Cohen. Russ retired from the Massachusetts Division of Fisheries and Wildlife last year and now spends his time connecting people to the outdoors through their taste buds.

With a wild edibles enthusiast on board, the team of conservation partners choose a wealth of native, edible plants that would benefit the ecosystem, stabilize the stream bank, and also supply some tasty snacks for passersby. Keene State College helped by growing the plants in their greenhouse and students from Keene State also came out to volunteer for the workday. 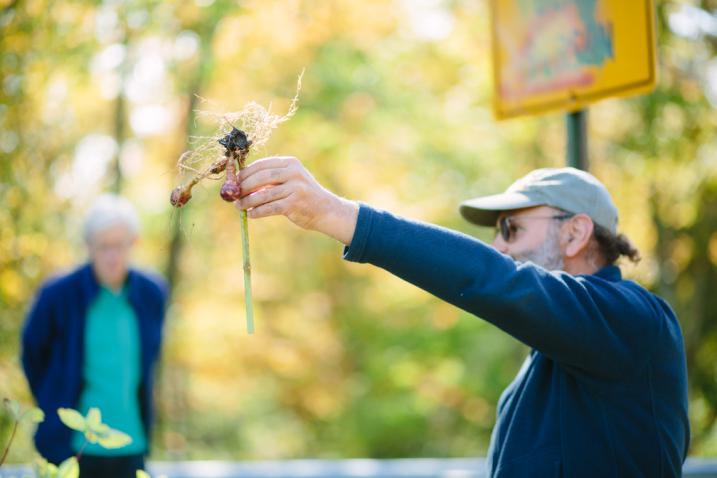 Before volunteers got to planting, Russ (pictured, above) gave the group a tutorial on the many plant varieties and how each one is edible and would benefit the ecosystem. From Shagbark Hickory (volunteers even sampled homemade cookies made from their nuts) to wild raisin, the plants used to restore the stream bank were a buffet for the imagination. 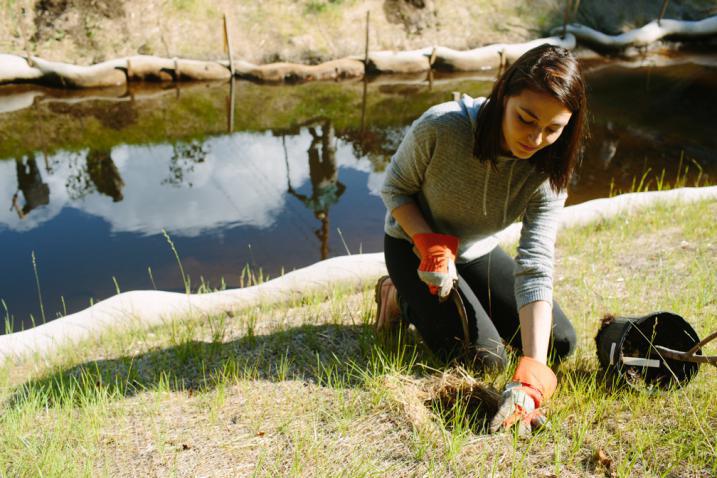 The Falls Brook restoration project is a success story of towns, nonprofits, and public agencies coming together to address a need that benefits both people and wildlife. It is also an example of science to action. Rather than creating a scientific study that sits on a shelf, these conservation partners wanted to engage community members right from the start, and the data the citizen scientists collected helped prioritize the Falls Brook project. Now there are more than 20 newly-connected miles of stream with high-quality habitat in Falls Brook and the Ashuelot River for wild brook trout, other fish, and aquatic wildlife, and the infrastructure in the community is more resilient against floods.

It is certain more volunteers, like town conservation commissioners, citizen scientists, and students, will be needed in future restoration efforts to create more wildlife- and flood-friendly stream crossings.