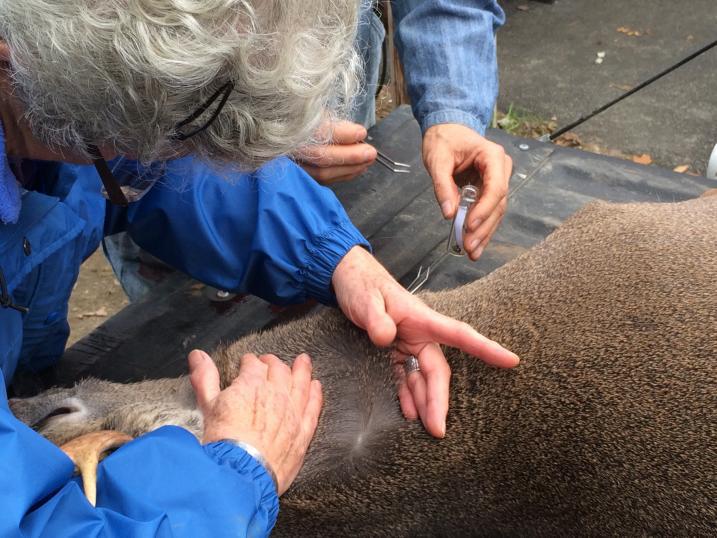 New Hampshire has the unfortunate distinction of being the state with the highest incidence of Lyme disease in the country, a disease transmitted by the blacklegged tick.

Several species of ticks are common here: blacklegged (formerly called deer tick), dog tick (mistakenly called wood tick), and winter tick (the one causing moose a lot of grief). Of the three, it is the blacklegged tick (Ixodes scapularis) that is spreading Lyme disease and more recently two other diseases that can affect humans: Babesiosis and Anaplasmosis. So, even more reason to be extra careful in the woods and to do a full body check (including head) for ticks when you get home.

Dr. Alan Eaton, entomologist and tick expert at UNH, is researching the distribution of blacklegged ticks in the state. The population of blacklegged ticks and the incidence of Lyme are highest in the seacoast. What better way to get more data on the distribution of both across the state then to collect ticks from deer brought into check stations during the hunting season.

With the help of Nature Groupie, Dr. Eaton rallied a handful of volunteers to assist him. The volunteer recruitment notice stated: "We are looking for people who don't mind handling ticks and dead animals, and who are okay working in cold weather and maybe getting their clothing dirty. And they have to be able to get up early and work throughout the day." Despite these challenging conditions 8 people (plus two from NH Fish and Game) said yes and on select days they fanned out across NH from Plainfield to Pittsburg.

In early November, to see how the effort was going, I drove west toward the Connecticut River to the deer check station at the Meridan Deli Mart in Plainfield. This country store has everything you need--groceries, snacks, lunch, gas, local news, and a deer registration station. 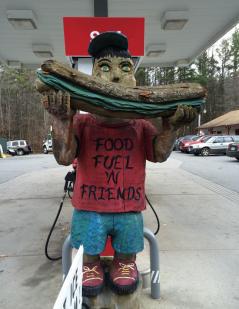 Hunters are required to register their deer at a check station. NH Fish and Game biologists are also there to gather data on the deer herd. They estimate the age of the deer (by looking at the teeth) and record its weight. A small crowd gathers around to guess the weight before it is revealed and to congratulate the hunter.

At the Meriden check station, NH Fish and Game biologist Rob Calvert was gathering the biological data. Ten deer were brought in before noon: 9 bucks and 1 doe. It was a little slower than Rob expected. He also thought there would be more does.

Once Rob finished, volunteer Barbara Mcilroy from Hanover moved in to scan the neck and collect any ticks and keds (more on these later) in a small vial. Barbara said, “This is fun. I enjoy meeting the hunters, and find it interesting to see how Fish and Game assesses the deer herd.” She also noticed a difference in the number of ticks on the deer. Some had few or none, others had a lot.

Alan Eaton was there too--he visits many check stations throughout the state to lend a hand and to chat with hunters about ticks. He offers fact sheets with web links to more information. His mantra is that if people become more aware of ticks and take precautions (wear suitable clothes and CHECK themselves daily) then the incidence of Lyme disease would decline, because people would remove ticks before ticks imbed and remain long enough to transfer the disease (about 24 hours).

Bob Welsh of Deering and a Coverts Cooperator, volunteered at check stations in two towns: Enfield and Lisbon in Grafton County. Bob had a great time. He said, “ One thing I found interesting about the study was how fascinated the hunters and even store owners were with what I was doing. I usually had someone breathing in my ear, asking questions while I was looking for ticks.” Bob saw many keds on every deer and tick numbers ranged from a few to 10 or so. “I educated lots of people, I hope,” said Bob.

Coverts Cooperator and tick project volunteer Bob Welsh with his presumeably tick-free Lakeland Terrier Brie (He was too busy at his check stations to take photos).

In Meriden the hunters were eager to volunteer all the ticks from their deer, and usually about then they headed into the Deli to get lunch. At the end of the season, Dr. Eaton will tally up the number of ticks from each town where deer were shot and the ticks will be sent to the Department of Public Health to analyze for Lyme disease.

So, what about those keds? The deer ked is a blood-sucking fly that is native to Europe. It has been here awhile, but seems to be on the increase. They look a bit like a tick at first glance, but they move very quickly, although not quick enough to escape Dr. Alan’s vials. He is also studying the distribution of keds and deer are a handy source. The ked is winged until it lands on a host, then sheds its wings. Dr. Eaton says, “As far as we know keds are not disease-spreaders, although they do increase the yuck factor among hunters, especially if they get in your beard.”

So, maybe this citizen science project is not for everyone—although both Barbara and Bob had fun--but it's a neat collaboration among hunters, scientists, biologists, and volunteers who are not squeamish around ticks, especially ticks on dead deer.