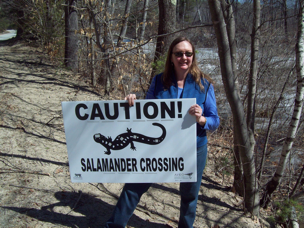 To a group of volunteers in the Monadnock Region, the words ”Big Night” are a big deal. It means that salamanders and their kin will get going on their annual spring migration from wintering higher grounds (under soil and leaf litter), to vernal pools and other suitable wetlands down below. Oftentimes, this migration takes them on perilous journeys across busy roads, where many more would perish, if it were not for a group of dedicated volunteers, known as the Salamander Crossing Brigades.

The Crossing Brigades is a project organized and run by Brett Amy Thelen, the Science Director for the Harris Center for Conservation Education and its citizen science arm, known as the Ashuelot Valley Environmental Observatory or AVEO. “We have been training volunteers for amphibian Crossing Brigades since 2006,” says Thelen, “We have about 300 volunteers on our Big Night email list, and typically 75-100 come out to the crossings in any given year.”

Most years, Big Nights happen over several rainy evenings. This April, the biggest Big Night fell on Monday, April 20th (it took a long time coming, after a very long and cold winter). Thelen has collected the tallies for that Monday Big Night, and the numbers are impressive: over 90 volunteers braved the elements to assist with ferrying some 3,000 lucky amphibians over dangerous roads. Since 2007, Crossing Brigade volunteers have helped more than 20,000 amphibians safely across roads.

Thelen says volunteers are crucial to the success of this project. “The amphibian migration is widespread geographically (it happens in many places), but not chronologically (it often happens over the course of just a few evenings each spring), so it would be impossible for just a handful of people to record amphibian counts and help animals across the road at our many known road crossings. Without volunteers, there simply are no Crossing Brigades.”

People want to know when they should be helping salamanders and frogs. In New Hampshire, depending on the weather, the amphibians generally set off on their journey in the months of late March to late April. The temperature and precipitation conditions have to be just right for them to start their migration: the first rainy, warm nights of spring (temperature above 40° F). The AVEO website tries to predict the nights of maximal amphibian movement, so that brigades of trained volunteers can be mobilized to go out at short notice.

I joined 13 volunteers on the Summer Street crossing in Peterborough on April 20th. According to Cathleen Calmer, the site coordinator, that was “the best in memory!” We were lucky to have hit upon a quiet weekday night with very little traffic. The motorists who did come by were very considerate: almost everyone slowed right down. Some even wound down their windows to chat with the volunteers about what was going on. That kind of interest and consideration always gives a warm feeling.

People tend to stay at the crossing sites from sundown to beyond 10 p.m. at night. When we signed off with Cathleen to go home, it was the slowest ride I ever took anywhere: we crawled back at walking pace, with me jumping in and out, still rescuing frogs and salamanders along the way. Luckily, no one was driving past in any direction. It was a very memorable experience. We’ll be back with the brigade next year.