Raft-a-Palooza: Kayaking for a Cause 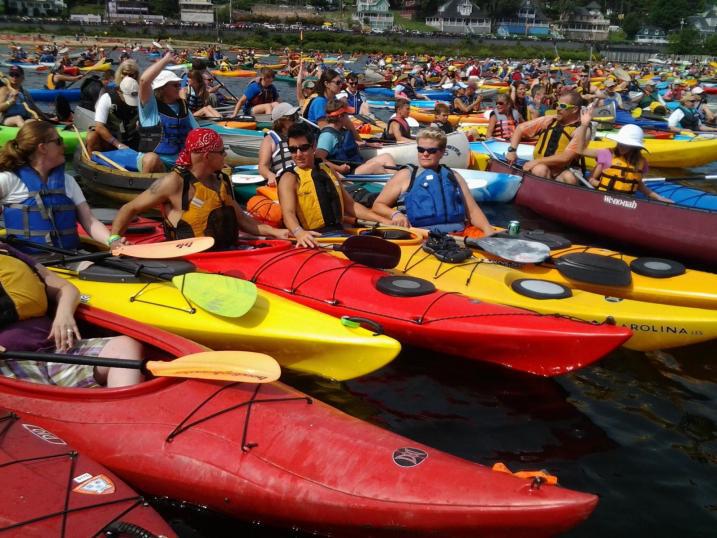 It was a boating frenzy at LakeFest: Raft-a-Palooza, as people pushed and paddled their way into Lake Winnipesaukee, collectively trying to break two Guinness World Records. The first--the largest simultaneous launch of canoes and kayaks in 15 seconds or less--was (unofficially) successful. We had 396 lined up for the simultaneous launch, which bested the 308 launching boats that set the current record last year in Tasmania. We were off the mark for the second record--an attempt for the largest raft of canoes and kayaks. We needed a whopping 1,700 more boats for that record; the record of 2,099 boats in a raft is held by Sutton's Bay, Michigan.

After the boats joined together in a floating raft of canoes and kayaks, we all headed back to shore to enjoy the festival portion of the day. As my husband loaded the boat on our car, I took my post under an educational tent to help kids answer the question "How does water move around?" The Watershed Warriors tent featured seven stations on topics including how lakes form, food webs, erosion and runoff, watershed pollution and invasive species. Each child that participated took a pledge to help protect water and lakes and received a Watershed Warrior patch.

This was a fun event, but there was a greater purpose: The N.H. Lakes Association (NH LAKES) organized LakeFest: Raft-a-Palooza with the goal of raising awareness about aquatic invasive species and getting boaters in the habit to "Clean, Drain and Dry" their boats before launching into a lake, pond or river. Aquatic invasive species, like variable milfoil and zebra mussels, crowd out native plants and animals, reduce property values, and foul up boating and swimming areas. But NH LAKES didn't do this alone. They had 75 volunteers helping with all aspects, from helping people unload their boats to conducting courtesy boat inspections, from giving us instructions before the launch to parking cars. There were several non-profit organizations available at informational booths, an arts market, and other vendors. It was truly a community-run event.

Funds raised through LakeFest directly support NH LAKES work to protect local lakes and their watersheds through education and advocacy. Since 2002, hundreds of paid and volunteer NH LAKES Lake Hosts have conducted more than 576,000 courtesy boat inspections and have made more than 1,409 "saves" of aquatic invasive plant fragments that were about to enter or had just left a waterbody.

To find out more about NH LAKES and LakeFest, go to www.nhlakes.org