One of the Crew 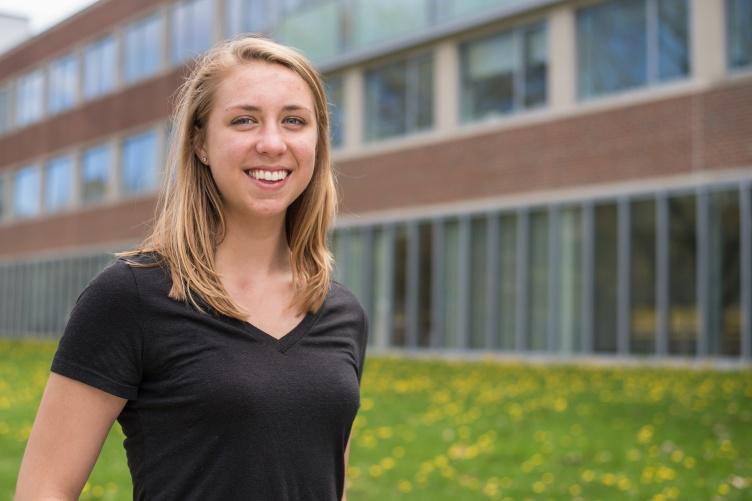 For the last half of July, I joined the UNH Office of Woodlands and Natural Areas summer crew, overseen by UNH’s Land Use Coordinator, Steve Eisenhaure. Steve manages the 3500 acres of wooded area owned by UNH and has been working this summer with two forest technicians, Marc Ghen and Sean Perreault. In the two weeks I spent with the crew, we accomplished an entire array of projects.

First on the docket was continuing a project that has been nine years in the making. Steve began plotting continuous forest inventory (CFI) points back in 2006 to provide a running stream of data for use by students and researchers. For every 2.5 acres of area, a permanent CFI marker is set, making a gridded pattern throughout all of UNH’s wooded land. From this point, data is taken on tree species, size, and health, and the trees are marked so measurements can be taken again at the same locations. Regeneration data is also taken on the number, size, and species of saplings growing within the plot. Pictures are taken of the canopy and site, and the point is mapped using GPS.

In total, Steve has collected data from over 820 points! With only one more property to go, he will finish plotting the grid next summer, and will then begin revisiting the first sites to gather the second round of data.

During the three days we spent on CFI, I gained a number of valuable skills. My tree identification became much stronger because I had to verbalize everything I saw within the site. I also learned how to identify saplings and distinguish them from other small herbaceous plants (which I also had to learn!). Finally, I learned how to use a vertex hypsometer to take tree heights, and I gained more practice in using diameter tapes.

We also accomplished several smaller projects like weed whacking a Christmas tree farm in Lee and getting a fresh coat of paint on information kiosks by commonly used trails. Additionally, we sent letters to land abutters to Mendum’s Pond about a new safety zone with changed hunting policies. Two half-days were spent over at Mendum’s Pond posting the safety zone signs and refreshing boundary blazes.

One day was spent at the horticulture farm insectary, where the stage is being set to grow and harvest Laricobius beetles, who are natural predators of the Hemlock Woolly Adelgid. 20 Eastern Hemlock trees on site have been infested with adelgid to provide a place to grow the beetles. Using brush saws, we thinned around the crop trees to allow greater access for harvesting and to stop the adelgid from spreading to the entire stand. We also selected possible future crop trees and thinned around those to make future expansion easier. It is hoped that this site will be able to supply Laricobius beetles to the entire region to control the Hemlock Woolly Adelgid.

A couple of days were centered in College Woods, building two foot bridges for the trails there. It was fun to put my engineering skills to use and create something that will be used every day by my peers. I cannot wait for the school year to start so I can show off my work to my friends!

Finally, my last day on the job brought us all the way to Ossipee, where Steve is overseeing a timber harvest in order to encourage white pine regeneration growth. We marked trees that are going to be cut, took their diameters, and estimated the products and revenue they would generate. I had never been exposed to the behind-the-scenes work for a harvest, and that day was eye-opening to all of the tradeoffs that must be weighed when making decisions.

The most striking thing about my time spent at UNH Woodlands was the faith and trust that Steve places in his crew. Only there for a day and a half, and not having any formal education in tree identification, Steve had me doing CFI regeneration identification of saplings. I was very hesitant at first, but Steve helped when I could not identify a plant, and I gained a ton of knowledge and confidence in that knowledge by the end of plotting. While tallying the marked trees for the harvest in Ossipee, Steve allowed me to estimate products and allowed Marc and Sean to select their own trees to cut as they saw fit. Every day, Steve would ask our opinions, and I think that more than anything fosters learning and problem-solving.

It was a wonderful couple of weeks filled with a lot of laughs from the hilarious crew. A couple run-ins with bees and nails in my foot were unpleasant, but I am now no worse for the wear (although my huge lip generated a lot of jokes).

Although it is a little sad to be leaving the Woodlands crew, I am excited to be off to the Natural Resources Conservation Service for the last leg of my internship. Check back in a bit for an update on my time there!