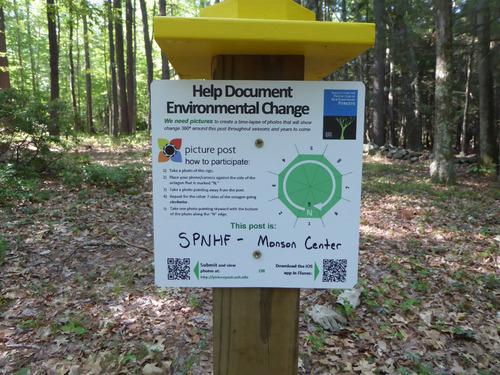 Monson Center, located in Milford NH, is a unique cultural and historic site.  Monson was an early colonial settlement that existed from 1737 to 1770 as one of New Hampshire’s first inland towns settled by Europeans. The property is popular with visitors who enjoy walking amongst the cellar holes, perhaps imagining how life was for these early settlers.

Native to Asia, the hemlock wooly adelgid was first reported in the eastern United States in Virginia in 1951.  It was first discovered in New Hampshire in 2000, and has spread throughout the southern part of the state. 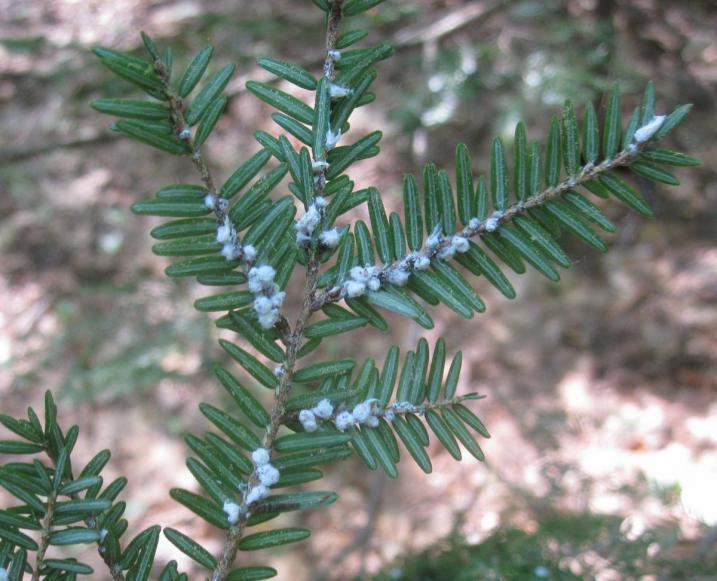 The small, wingless insect nestles itself on the young twig of a hemlock branch, using its piercing mouth-parts to feed on the tree’s sap and nutrients.  They secrete a white, wooly, waxy material from the pores of their body - this is the easiest way to note their presence in a hemlock stand (look on the underside of hemlock needles). The insect is spread by wind, birds, and forest-dwelling mammals. Once infested, hemlock trees typically decline and die within 4 to 10 years.

Hemlock wooly adelgid was first noted at Monson Center in 2008. The decline of hemlock at this site, and throughout the region’s forests, is concerning for many reasons.  Hemlocks cast a dense shade and can often be found in wet areas, resulting in cold water temperatures in streams, which is important for native trout and other wildlife. In winter, the areas underneath hemlock trees are typically warmer and have less snow than in surrounding hardwood or pine forests, making these areas particularly important for deer.

The goal of this Picture Post is to understand how quickly the hemlocks are declining at Monson, and to assess how the forest responds afterwards.  Interestingly, the forests of Monson were once dominated by American chestnut trees, which were killed off in the early 1900s by a non-native fungus. How will forests respond to the loss or major decline of another major tree species? Since the infestation at Monson was one of the earliest detections of this insect in a forested setting in New Hampshire, it could provide valuable insights into how we can expect the insect to affect more recently infested areas.

This is the first Picture Post that we have installed on Forest Society lands, and several more are in the works. Two were recently installed on our Merrimack River floodplain forest, in an attempt to document natural river erosion and forest changes by another forest pest, the emerald ash borer. We are also very excited to use Picture Posts to document sustainable timber harvesting and natural forest regeneration.

Contribute to these recently installed Picture Posts in New Hampshire: