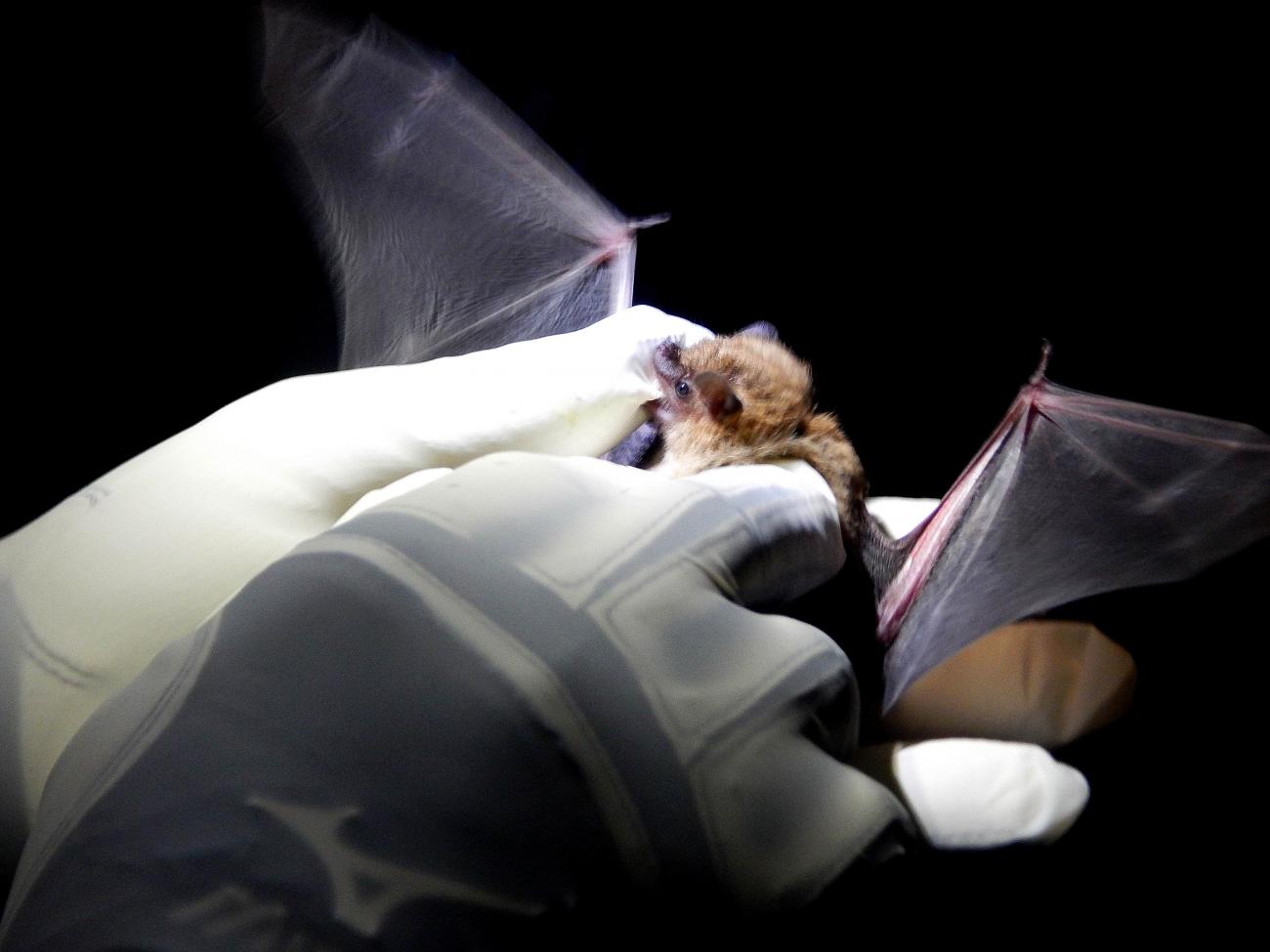 You may have seen them flying around at dusk or even throughout the night, zipping back and forth through the air, without making a sound. Bats are extraordinary creatures that are unique in their own way. Unfortunately a fungus, known to cause White Nose Syndrome among bats, is severely damaging populations of bats around the country. Before the epidemic, on any given night you would have seen hundreds of bats; today, you can count them on one hand. For three nights we eagerly waited to see if we could capture one of the most threatened species of bats here in New Hampshire, the Northern Long-Eared bat. Sitting in the dark, we would check the nets every ten minutes, searching the nets inch by inch. We caught several Big Brown Bats, which were all the size of an open hand, showing their sharp, elegant array of teeth and their vocal range of pattern clicks.

The data collected helps researchers, and the Great Bay Refuge, to understand where the bats are located, as well as the degree to which White Nose Syndrome is affecting individual bats. Although, we did not catch our target species, there is still hope, as later this summer researchers will try again to capture, band, and discover if the Northern Long-Eared Bat is really gone.

Invasive species are everywhere, in our backyards, forests, lakes and streams. Much of the areas that we protect are covered in invasive species! And it is no different at Great Bay. In an effort to put the spotlight on these species, we set out to map the location and percent coverage of invasive plants within the more than 1,000 acres at Great Bay National Wildlife Refuge. Armed with an Arcpad GPS system, an antennae, and a booklet of the species we were to look for, we set off grid by grid to highlight the most “infected” areas. It wasn’t long until we realized that 1,000 plus acres is a lot….Yet for the short amount of time I helped we discovered heaps of Autumn Olive, Barberry, Buckthorn, Honeysuckle, Bittersweet and many more invasive species stretching throughout the refuge. From the data collected we created a map using ArcGIS to show the degree of invasiveness in each plot. Although, there are still 1900 or so grids lef to survey, the fight against invasive species has started!

Where is the PEP in Pepperweed Pulling?

Pepperweed is an invasive plant that grows in open sunny patches along roads, in sand dunes, as well as around salt marshes. Although not a problem in New Hampshire, a few steps into Massachusetts, along Plum Island, this weed stretches across the marshes in full force. Affecting the growth of the native Marsh Elder, Pepperweed is a big problem that, if not treated urgently, will cause a lot of damage by altering the saltmarsh habitats. As an example, Marsh Elder creates a scrub brush habitat that is preferred by the Eastern Cottontail as well as the threatened and rare New England Cottontail. When Pepperweed invades it creates an environment ill-suited for many animals including the rare cottontail. Fitted with high waist rubber boots I walked miles of salt marsh, coupled with hours upon hours of pulling each plant and rosette of Pepperweed I could see. For a week, I picked at different spots, seeing the trash bags of Pepperweed increasingly growing. On a Friday afternoon exhausted after a hard day, and week, of pulling, we reached the end of all the Pepperweed. There is a sense of pride knowing that an area once covered in plants that can reach up to 8 feet tall is now covered by native grasses and plants.

The story of the Karner Blue Butterfly and Blue Lupine is a hidden gem. Both the butterfly and the plant are facing issues of population decline.  In fact, their populations have become so small, and threatened that one may never see either of the two. Yet, there is hope for both populations to rebound. You wouldn’t know it, but behind the barracks and heavily guarded gates of the National Guard airport in Concord, NH, staggered around the landing strip are patches of Blue Lupine growing undisturbed. We collect the seeds, just as they were about to pop and carried them in bags over our shoulder. Blue Lupine is the preferred food for the Karner Blue Butterfly larvae, and is needed for their growth, eventually metamorphosing into butterflies. Once collected, the seeds are dried and separated from the pods, then stored to await being planted for the following year. It is a cycle, and one that has been effective to rebound the population of Lupine in New Hampshire. In a separate lab Karner Blue Butterfly larvae, which are sent from New York to help rebuild the population in Concord, are taken and fed lupine leaves, and are carefully observed for several weeks- waiting until the larvae turn into a pupae.

Carefully, transferring the pupae into a “butterfly shelter” the next step is to wait for the special moment. Soon, as if stirred by an external signal there comes movement, and soon a break in the shell. No bigger than a thumb nail, but strutting a bold blue, the Karner Blue Butterfly takes its first flight. With efforts to increase both Blue Lupine and Butterfly populations here in New Hampshire, each hatching and planting every year has added to the wild populations of both threatened species. Slowly the two are making a comeback, making them an extraordinary duo. 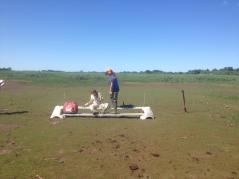 On a hot and muggy day we stand on the edge of a mud flat, drained now, with only little pools of still water baking in the sun. We head into the mud with our hip high rubber boots. The task today is to set up probes that collect data on the build up of sedimentation within the salt marsh. I lugged behind me various equipment (jackhammer, cement, metal poles, etc.) on a sled as we trudge through knee-deep mud to our marked point. Careful not to step on or near the marker, we balanced on beams drilling 4-foot pole after 4-foot pole with a jackhammer. My body shaking as I push the jackhammer down on the 20th pole I hit bedrock. My body still shaking as I stop, I step off and quick hands are hard at work securing the head of the gadget. Soon the probe stands facing above the ground, without delay we clean up and move again trudging to another marked point. The only remnants of our visit are light footsteps and the probe.

My heels dig into the thick wet mud. I am walking slowly, eyes panning around trying to pick up their quick movements, ears open to hear the sound of their chirps. I stand in a salt marsh stretching farther then the eye can see. Every year all types of birds and waterfowl come to these areas looking for rest, food, and shelter. Those who call this place home nest on the grasses and reeds that jut out from the mud. On this occasion, we are after the unique saltmarsh sparrow, a small bird adapted to live in these flooded plains. They are so unique, that they recognize the pattern of the tides and can lay a clutch of eggs, and raise their young all before the tide changes, every 28 days, just as their nest flood. Then, as if nothing happened, they repeat this cycle. Unfortunately, through climate change, flooding has begun to happen at irregular intervals, causing the mid-tide to be higher then usual, leading to population declines of this unique bird. Though hope is not lost as we continue to understand this species and tinker in our toolbox, we can now create floating grass and reed platforms perfect for the Sparrow to nest in peace.

Although there are many trials that we are, and will continue to face that pose risks to all things living, we surprise ourselves as we continue to find new ways to help those without a voice. Science will never dry out, as we continue to come together, no matter your expertise, profession, age, or time, we can all make a difference.

Thank you to everyone at Great Bay and Parker River National Wildlife Refuges for these amazing three weeks full of great memories and fun times. I’ll miss the crazy and surprising days, but I am off to work on conserved properties working with the Southeast Land Trust of New Hampshire. Till next time!