A Day at the Docks with Baby Oysters 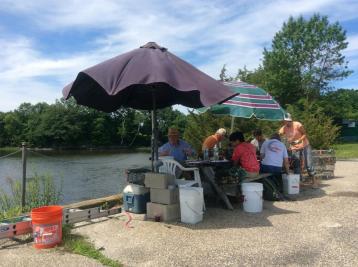 Hopefully you’ve seen it on our Events Calendar, but I was glad to see that all of the volunteers I was with on Monday morning knew of the Oyster Spat Count Restoration Effort from The Stewardship Network: New England! We spent our time at the Jackson Estuarine Laboratory in Durham, NH sorting cages of recycled oyster shells and counting baby oysters.

Restaurants and the public bring their oyster shells to the lab where they are cleaned and reused. Oyster larva is released and fingers are crossed for baby oysters (spat) to settle onto the shells and begin growing. We were looking for translucent red-brown spots with a black V-shape, and 1 - 7mm in diameter. Once the spat has grown enough, they begin growing vertically.

It took a couple of tries to distinguish the spat from the many other living things on the shells, but we all became skilled observers in a short time. We also became accustomed to the many arthropods squirming on the shells and enjoyed removing the sea squirts who are one of the spat’s many competitors. 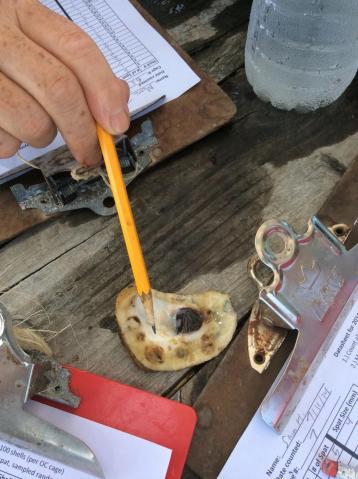 While some were sorting shells with spat from shells without spat, others were collecting important data. Each cage has its own data sheet that includes number of spat on each shell in the cage, whether there were no spat or the 47 spat we found on the shell pictured. The first 25 spat found had their length measured and the rest of the sheet was filled with the number of spat on each shell. 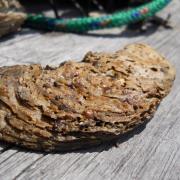 Unfortunately many shells had no spat according to our eyes; we learned that in other years shells average 30 spat per shell. The high mortality rate isn’t the best news we’d heard, but knowing there are many people putting their effort towards this restoration brings hope. One is Kara McKeton of The Nature Conservancy, whose organization has a partnership with The University of New Hampshire in 2009, five years after UNH began the program.

Kara educated us about the entire project and how our efforts would help with their goal of restoring 100 acres of oyster reefs in Great Bay. Before over-harvesting and the introduction of a disease, the oysters could filter all the water in the Great Bay once every four days. Now it takes an entire year to filter the bay. This made it even more worthwhile for us to continue our task, no matter how small it seemed.

After the number of spat is tallied, the shells are returned to their cages. At this stage, there are fewer shells per cage in the hopes of collecting natural spat and allowing the settled spat to grow. These cages will be distributed among seventy different coastal locations around Great Bay; volunteers (often dock owners) will count and measure the spat as they move into their vertical growing stage. Not all of the spat we found Monday will survive due to natural competition and other reasons which are being researched by those at the Jackson Lab.

The Nature Conservancy will organize another volunteer data collection effort at the end of the summer, after the oyster cages have been collected from docks around the bay.  Keep an eye on Nature Groupie Calendar (or contact the Nature Conservancy’s New Hampshire Chapter) to join the effort!